Controlled burns were the cause, but increasing aridity has upped the odds that any ignition will blow up into a large blaze. 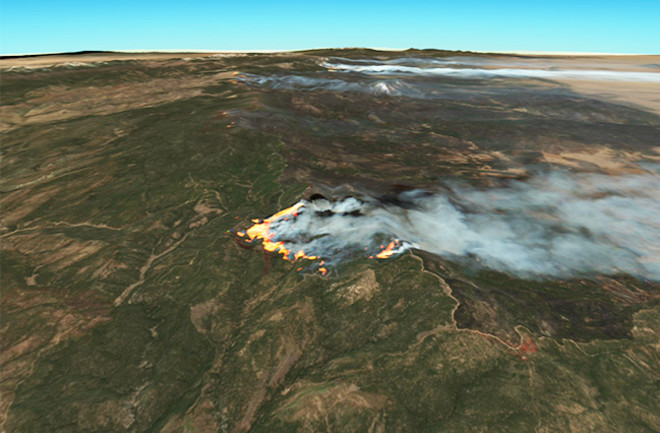 A screenshot from a simulated flyover of the Hermits Peak and Calf Canyon Fire in New Mexico, based on satellite data acquired on May 13, 2022. Initially sparked by a prescribed burn that got out of control, by May 29, the fire had become the largest in New Mexico history. Please see below for the visualization. (Credit: Copernicus Sentinel data processed by Tom Yulsman)

A New Mexico wildfire that has burned an area more than one and a half times the size of New York City was initially sparked by prescribed burns lit by the U.S. Forest Service, investigators announced late last week.

In truth, global warming doesn't spontaneously "start" fires. But whether humans or lightning provide the initial spark, soils and vegetation made drier by a warming climate are more likely to catch fire and result in a large, raging blaze.

That’s not just common sense. Multiple studies support this picture, showing that warmer temperatures and earlier spring snowmelt have spurred significant increases in the size and frequency of wildfires in the western United States.

Almost all of the West now is in drought, and large portions are experiencing extreme to exceptional drought — the two most intense categories. That includes almost all of New Mexico. So it should come as no surprise that any small fire could easily turn into a large, intense one, no matter the cause.

Unfortunately, a quick shift in fortunes is unlikely for New Mexico's Hermits Peak and Calf Canyon Fire, along with another large one raging to the southwest. The latest outlook from NOAA's Climate Prediction Center shows a hot and dry summer ahead across large portions of the West.

So these two blazes — which are being battled by nearly 4,000 personnel and together are approaching three times the size of the City of Los Angeles — could be a preview of a horrible burning season to come.

Virtual Fly-Over of the Fire

The sheer immensity of fires like this is difficult to comprehend. Saying that a blaze is larger than this or that city may help. But seeing truly is believing.

With that in mind, I created a visualization using satellite image data collected by the Sentinel 2 satellite over the Hermits Peak and Calf Canyon Fire on May 13. (I chose that date because image data with few obscuring clouds were available.) The blaze had already grown to 270,447 acres (nearly twice the size of Chicago). Since then, it has increased in size by more than 40,000 acres, and it is only 50 percent contained as of May 30.

The visualization offers a virtual flyover of the blaze using light gathered by the satellite sensors in the visible and infrared portions of the spectrum, along with topographic information to provide a simulated 3-D view:

The virtual flight begins just south of the town of Ribera at the southern end of the Sangre de Cristo Mountains. It passes over Interstate-25 and then into the mountains, where charcoal-colored areas reveal scorched landscape. As the flight continues north, you may be able to spot an uneven orange line at the western edge of the burn scar. This could be traces of fire retardant dropped by aircraft to help contain the blaze. The yellow, orange and red areas from which smoke billows are not flames per se but the infrared signature of heat from actively burning areas.

The simulated flight continues north, close to the crest of the range, and then shifts to the northeast and east, showing the broad extent of the burned area.

About three minutes into the visualization, a separate burned area comes into view to the northeast. This large expanse was scorched by another fire, the Cooks Peak Fire, which is also believed to have been human-caused, although the details are still being investigated.

The blaze began on April 17 and ultimately burned nearly 60,000 acres before being fully contained on May 13 — the very day that the Sentinel satellite captured the imagery data I used to create the virtual flyover. It's located at the eastern edge of the mountains, about 28 miles across the Sangre de Cristo Mountains from the city of Taos. From this point, the visualization retreats back south (with the view remaining toward the north) and eventually finishes at the starting point. The entire journey has covered about 250 miles — north, then east, and then back south to the beginning.

A broad overview of the Hermits Peak and Calf Canyon Fire in New Mexico, acquired by the Sentinel 2 satellite on May 13. (Credit: modified Copernicus Sentinel data processed by Tom Yulsman via EO Browser)

The image above shows what the view looks like in regular 2-D. (To view it in a large browser window, go here.) And here's a closeup view, created using data from the same satellite on the same day by remote sensing specialist Pierre Markuse:

A closeup view of the Hermits Peak and Calf Canyon Fire, acquired by the Sentinel 2 satellite on May 13, 2022. (Credit: Modified Copernicus Sentinel data, processed by Pierre Markuse)

Meanwhile, to the southwest, another major blaze is burning out of control: the Black Fire. As of May 30, it has scorched 241,402 acres. It, too, is believed to be human caused.

As with the Hermits Peak and Calf Canyon Fire, I decided to create a virtual flyover of this blaze too. Here it is:

The visualization starts south of the Black Fire, moves north over the actively burning area, and then continues to the northeast, stopping over Albuquerque, New Mexico's largest city.

Unfortunately, as I'm writing this on May 30, a red flag warning is in effect for the area of the blaze. High temperatures, gusty winds up to 40 miles per hour, and low humidity, are likely to fan the flames, making it all the more challenging and dangerous for firefighters.

While denial of climate science continues to smolder on social media and elsewhere even as blazes like this burn, yet more research recently has shown a disturbing trend in western U.S. wildfires: they’re increasing — and not just modestly.

"We found compelling evidence that average fire events in regions of the United States are up to four times the size, triple the frequency, and more widespread in the 2000s than in the previous two decades," three University of Colorado scientists wrote in a study published last March in the journal Science Advances. "Moreover, the most extreme fires are also larger, more common, and more likely to co-occur with other extreme fires."

In their paper, the scientists point to studies showing a strong correlation between increasing dryness and the area burned during fire season in the West. "Although natural variability played a role, up to two-thirds of this increase in aridity has been attributed to anthropogenic warming," they wrote.

A large percentage of wildfires actually are sparked by humans. Because climate change makes them more likely to grow into monsters, it behooves us to do everything possible to prevent ignitions.

We can also lessen the damage we suffer when wildfires do blow up by taking steps to be more resilient, including creating defensible space around our homes, building structures with fire-resistant materials, and adopting other common sense measures.

However, one thing clearly will not help us be more resilient: denying reality.

In the interest of transparency, I should note that all three authors of the Science Advances study are colleagues of mine at the University of Colorado. But I had no involvement in their research.