It's half as large as last year's, but it would have been much worse without the ban on ozone-depleting chemicals. 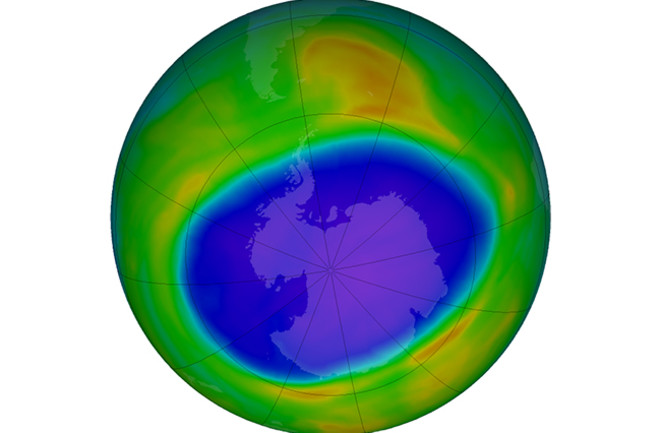 The Antarctic ozone hole on Sept. 20, 2020, when concentrations of the gas reached their lowest extent for the year. Purple and blue is where ozone is lowest. (Credit: NASA)

That's slightly larger than the size of the contiguous United States.

At 7 to 25 miles above Earth’s surface, ozone in the stratosphere is a vital planetary sunscreen, absorbing ultraviolet radiation that would otherwise reach Earth’s surface in amounts that are harmful to many forms of life — including people and crops we depend on.

A NOAA ozonezonde, an instrument used to help scientists monitor the Antarctic ozone hole, ascends over the South Pole in this timelapse photo taken Oct. 21. (Credit: Yuya Makino/IceCub via NOAA)

Over the long term, a treaty banning the use of human-made chemicals that deplete stratospheric ozone has reduced the hole's severity. But shifting weather patterns year-to-year have led to significant ups and downs.

Although 2020's ozone hole was a setback compared to last year, it's smaller than it would have been 20 years ago, thanks to the Montreal Protocol. The treaty, finalized in 1987, has steadily reduced ozone-depleting chemicals in the atmosphere.

"We have a long way to go, but that improvement made a big difference this year,” said Paul A. Newman, of NASA's Goddard Space Flight Center, in an announcement today. “The hole would have been about a million square miles larger if there was still as much chlorine in the stratosphere as there was in 2000.”

At its peak on Sept. 20, this year's ozone hole covered about 9.6 million square miles. "Observations revealed the nearly complete elimination of ozone in a 4-mile-high column of the stratosphere over the South Pole," according to today's announcement.

Last year's ozone hole was the smallest on record, due in large measure to unusually warm temperatures in the stratosphere. This year, conditions reversed, with persistent cold that helped spur chemical reactions that led to ozone depletion.

NASA and NOAA scientists expect this year's relatively large and deep ozone hole to persist into November. It has been the 12th-largest ever measured in the 40 years of satellite records.