An animation of satellite images reveals the stunning pall of dust and pollution that recently choked Beijing. (Images: NASA Worldview. Animation: Tom Yulsman) About a week ago, dust sweeping north from the Sahara blanketed parts of Eastern Europe, turning snow-covered ski slopes a strange shade of orange. Now, another far-ranging pall of dust — exacerbated by nasty air pollution — is in the news, this time in northeast Asia. Starting on March 26th, China's northern regions were hit with their fourth round of sandstorms this year, according to the Xinhua news agency. By the 28th, Beijing was choking on heavy dust mixed with air pollutants that pushed air quality readings to hazardous levels. I created the animation of satellite images above to show just how bad things got. The 'before' image was acquired by NASA's Terra satellite on March 24th. The 'after' image shows the view captured by Aqua, Terra's twin, on March 28th. Make sure to click on the animation and then click again to enlarge it. In the March 24th image, you can clearly make out a grid of roads and other signs of development in Beijing. In the March 28th image, Beijing and surroundings are totally obscured. https://twitter.com/Dust_Barcelona/status/979252730647793664 All told, 580,000 square miles of China were enveloped in dust, according to the China Meteorological Administration. That's about a sixth of the country, and an area almost as expansive as Alaska. But the dust didn't stop there, as this satellite image shows: 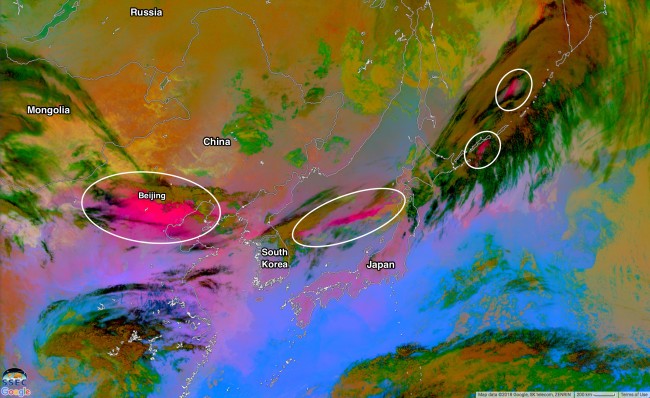 Satellite image of northeastern Asia acquired on March 28th, 2018. (Source: SSEC/CIMSS RealEarth) In the image, acquired by the Himawari-8 satellite on March 28th, thick areas of dust are indicated in vibrant pink and magenta colors. (I've circled the most obvious ones.) It's clear from the image that dust blew from China across the Korean Peninsula, northeast past Japan, and at least all the way to Russia's Kamchatka Peninsula. By my rough calculation, that's a swath of territory more than 2,000 miles long. Lastly, here's a broad natural-color view from orbit: 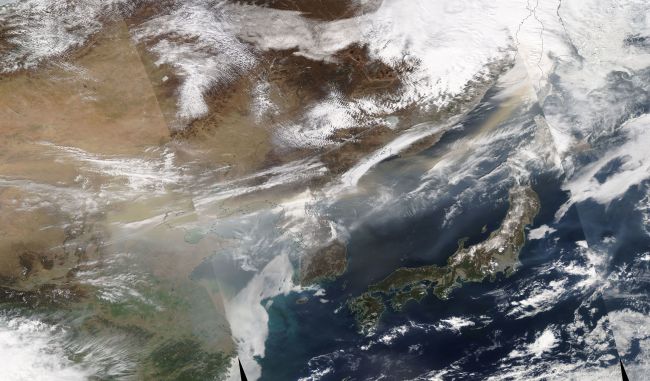 Satellite view of northeast Asia on March 28th, 2018. (Source: NASA Worldview) The data that went into creating this image were also acquired by the Aqua satellite on the 28th. A long, sand-colored streak clearly is visible curving from the Beijing area on the left side of the image all the way past Japan at upper right. Click on the image to enlarge it to get a dramatic synoptic view. And then click on it again to zoom in and examine particular areas in detail.