The growth of California's Rim Fire as tracked by the Suomi NPP satellite on the nights of August 23 through the 26th. (Image: NASA Earth Observatory) On Monday morning, I published two images and an animation showing California's dangerous Rim Fire from the vantage of space. Since then, additional imagery has become available, so I thought I'd share those with you too. The animation at the top of the post consists of four images from the Suomi NPP satellite published by NASA's Earth Observatory. Captured at night, the pictures show the fire as it evolved from August 23 through August 26th. Yosemite National Park is outlined in yellow. 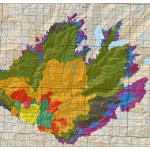 Progression of the Rim Fire Aug 17-26. (Map: Inciweb) Inciweb, an interagency incident information web site, published a detailed, color-coded map showing the evolution of the fire. Click on the thumbnail at right to see it. As the map shows, the blaze has now burned its way to within a mile or so of the Hetch Hetchy Reservoir, source of 85 percent of San Francisco's drinking water, and also a good deal of its electrical power (thanks to hydropower facilities). As I'm writing this on Monday night, Inciweb's latest report pegs the fire at 160,980 acres, more than half the size of the city of Los Angeles (and as large as Chicago).

The Rim Fire as seen on Aug. 25, 2013 by the Suomi NPP satellite's VIIRS instrument. (Image: NASA/NOAA) That number is up from a little more than 149,000 acres this morning. But firefighters have made some progress. As of this morning, the fire was 15 percent contained. Now it's up to 20 percent. Click on the thumbnail at left to see how the fire compares in size to the state of California overall, most of which is visible in the image. (Look for the blue-tinged smoke plumes, which are distinct from the whiter clouds.) Karen Nyberg, an astronaut aboard the International Space Station, has Tweeted two pictures of the fire so far. Here's the second one, shot today as the ISS flew directly overhead: 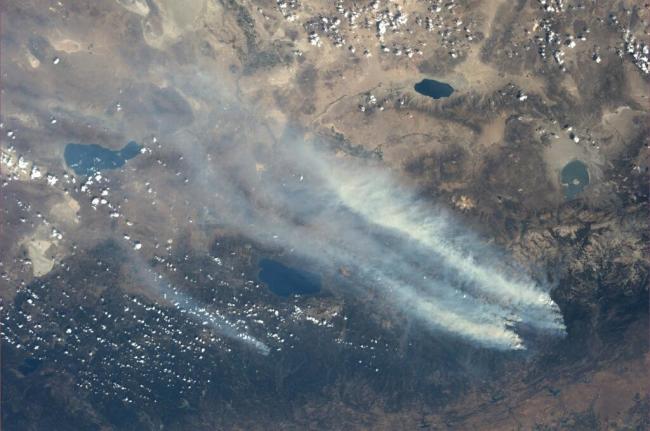 NASA astronaut Karen Nyberg shot this photo of the Rim Fire as the International Space Station flew directly overhead on Monday, August 26th. (Photograph: Karen L. Nyberg/NASA) In the photograph, east is up. Lake Tahoe is visible to the left and slightly up from the active burning area. Mono Lake, just east of Yosemite National Park, is near the right edge of the image, and toward the upper right corner. The first six months of this year were the driest on record in California. That set the state up for an early start to the fire season, and an unusually active one so far, according to a recent update from the California Department of Forestry and Fire Protection. It's not even remotely close to being over yet. When the Santa Ana winds start up in the next few weeks, things could get very interesting in Southern California.