Double Typhoon Trouble in the Western Pacific, Plus a Brewing Storm in the Atlantic Ocean 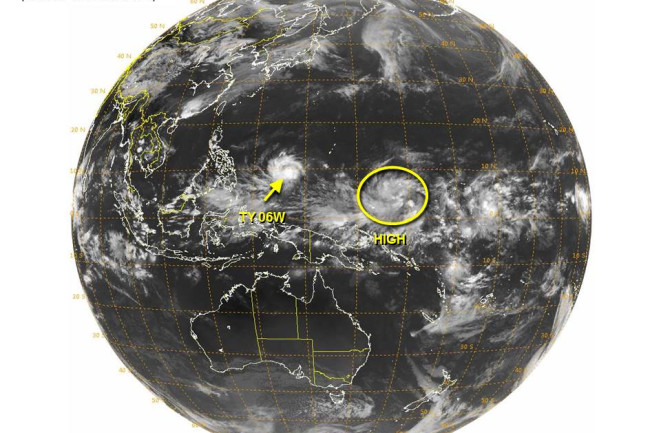 Two tropical systems are seen in this satellite image of the Pacific Ocean basin. Typhoon Noul is marked TY06W. The system to its east stands a high chance of developing into a typhoon. (Source: JTWC) As Typhoon Noul continues to spin up in the western Pacific Ocean, posing a distinct threat to the Philippines this weekend, a big tropical depression to the east is growing and stands a high chance of developing into a "significant tropical cyclone within the next 24 hours," according to the Joint Typhoon Warning Center. Meanwhile, in the Atlantic, an area of disturbed weather over the Northwest Bahamas designated as Invest 90L could become a subtropical depression by Friday. The storm will likely bring heavy rain and high surf to the Carolinas on Friday. Back in the Pacific, Noul has already brought high winds and heavy rain to Yap Island. The typhoon's maximum sustained winds were pegged earlier today at 86 miles per hour, with gusts to 103. Here's how the typhoon looked in satellite microwave imagery as it approached Yap:

Source: CIMSS Now it's looking like Typhoon Noul's track could take it a little to the west of where models previously forecast it to go — and that could be bad news for the Philippines. According to the Joint Typhoon Warning Center, the storm is currently expected to make landfall on the east coast of the Philippine island of Luzon early on Sunday local time — with sustained winds of 105 miles per hour. It's important to note, however, that there is still some uncertainty about the storm's ultimate track. Here's the JTC's forecast (and note that "TAU" refers to the number of hours from the time of the forecast):

THE CYCLONE IS NOW EXPECTED TO MAKE LANDFALL FURTHER SOUTH ALONG THE EAST COAST OF LUZON, NEAR CASIGURAN AROUND TAU 84. AFTERWARDS, IT WILL RAPIDLY ERODE AS IT DRAGS ACROSS RUGGED MOUNTAIN RANGES; HOWEVER, IT WILL STILL BE A STRONG TROPICAL STORM WHEN IT EXITS INTO THE SOUTH CHINA SEA SOUTH OF LAOAG SHORTLY AFTER TAU 96.

An animation of infrared satellite imagery of Typhoon Noul, with the storm's forecast track as of 5/06/15. The Philippines are at upper left. (Source: CIMSS) Whether or not Noul does make landfall in the Philippines, or simply grazes it, the storm will be the second tropical cyclone to affect the archipelago in 2015. As Bob Henson points out at Wunderground.com:

The first was Tropical Storm Maysak, which hit the Philippines exceptionally early in the season--during Easter weekend, April 4 - 5.

It's a good thing that Maysak weakened considerably before making landfall. Earlier on its trek across the western Pacific it was a Category 5 super typhoon that was notable for its strength so early in the season. The system to the west of Noul has now strengthened into a tropical depression.

Tropical Depression 7, as seen in an infrared satellite image. (Source: CIMSS) Designated Tropical Depression 7, the storm continues to gather strength as it heads in the general direction of Guam and the Northern Mariana Islands. It's current forecast track is overlain in the infrared satellite image above. The islands form an arc in the upper left corner of the image.