Did Huge Volcanic Eruptions Help Kill Off The Dinosaurs? 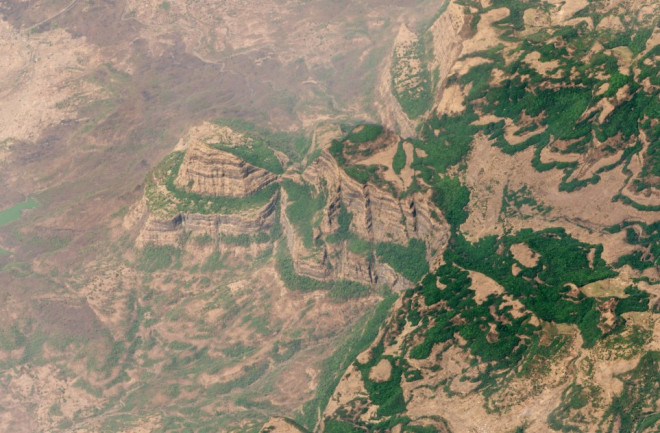 Nearly 66 million years ago, most living things on Earth died. Most researchers agree that the prime culprit was an asteroid that struck Mexico’s Yucatan Peninsula, leading to the mass extinction that took out most of the dinosaurs. But in a new research published Thursday, two independent research groups are making the case that enormous volcanic eruptions in India likely contributed to the demise of life, too.

The findings shed light on not only one of the most famous events in Earth’s history, but also the potential consequences of current environmental change, the researchers say.

“Understanding past extinction events — their causes, and eventual climatic and biotic recoveries — is crucial … when trying to wrap our heads around the many possible outcomes of our current trajectory towards disastrous climate change, ecosystem destruction and potential mass extinction,” Blair Schoene, a geologist at Princeton University in New Jersey, who led one of two new studies, said in a statement.

Geologic evidence uncovered in the ’80s and ’90s led researchers to conclude that a giant asteroid’s collision with Earth caused the extinction event. That setoff a worldwide hunt for the impact site. Amd geologists announced they’d finally discovered the Chicxulub crater in 1991.

“Despite this evidence, the impactor hypothesis has met with some skepticism because many extinction events roughly coincide with the [explosion] of enormous volumes of volcanic rock onto and into Earth’s crust,” explains Seth Burgess, a volcanologist with the U.S. Geological Survey in Menlo Park, California, who was not involved in the research, in a related perspective piece.

That lingering debate has led other scientists to study India’s Deccan plateau, an enormous landmass extending east and south of Mumbai, to create a precise timeline of the volcanic eruptions. For the latest analysis, Schoene and a research team studied uranium and lead isotopes — commonly used to date rocks — that they found in zircon mineral crystals buried beneath the lava flows. It revealed four high-volume eruptions that happened between 66.4 and 65.6 million years ago. The data show that the second of these eruptions likely began tens of thousands of years before the mass extinction event, the researchers report in the journal Science.

In a second study also out Thursday in Science, another team used a different technique to corroborate the finding. Here, the researchers assessed argon isotopes to date the eruption of lavas in the area. Their analysis also showed the eruptions began thousands of years before the mass extinction. However, the investigation revealed a more or less continuous eruption that lasted for about a million years. Although the finding contrasts with the punctuated eruptions Schoene and team discovered, both studies agree the Deccan eruptions likely played a role in the mass extinction event.

Given the timing of the eruption events and the meteor impact, it’s possible the two triggers delivered a double-whammy deathblow.

“Both of our datasets suggest a coincidence between the onset of Deccan eruptions and Late Cretaceous climate change, which has been attributed to the weakening of Late Cretaceous ecosystems, possibly making them more susceptible to the effects from the meteor impact,” Courtney Sprain, a geoscientist who led the second study while at the University of California Berkeley, said in a statement.