The long-term impacts of forest lost could lead to diminishing populations, poorer diets and other consequences for some animals. 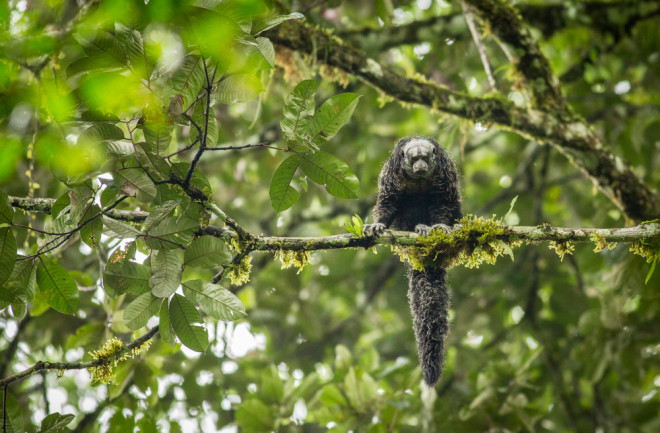 Deforestation kills. Obviously the trees are gone right away, as well as chicks in nests, tree frogs or other wildlife that comes between falling trees and the ground. But what about the animals that survive the initial process of deforestation? Can losing forests cause secondary effects that aren’t immediately lethal for wildlife?

New research shows that deforestation can indeed cause problems through high levels of stress, which can lead to unsuccessful reproduction, unhealthy shifts in diet and other threatening outcomes.

“Changes in the habitat often times leads to behavioral, ecological and physiological changes and they are all usually related to each other,” says Sarah Boyle, a biologist at Rhodes College in Memphis, Tenn. “That’s then related to conservation outcomes in the future.”

Boyle has conducted a number of studies on the stress levels experienced by different wildlife species in deforested and relatively pristine areas in South America. As a graduate student at Arizona State University, she found that different types of forested land affected monkeys around Manaus in the Brazilian Amazon in unique ways. Spider monkeys, for example, were nearly absent from smaller patches of forest while howler monkeys didn’t seem as effected.

Black bearded sakis, which sport unique looking twin bulges of hair on their heads and bushy beards, changed their habits and life history in patches of fragmented forest that were relatively small compared to sakis in larger tracts of land.

The researchers found that the bearded sakis in the smaller stretches of forest spent a lot more time returning to the same patches of forest—they traveled around in circles compared to the relatively free-wandering ways of those in the larger tracts.

Bearded sakis are a social species. But the groups in the larger forests sometimes reached 30–40 individuals, while those in the fragmented areas often only traveled in groups of three or four. Despite the smaller groups in the latter areas, those bearded sakis lived much more densely compared to those in bigger forests. The diet changed as well — with those in the smaller sections of forest eating more suboptimal or less nutritious food.

“They were eating plants that they could otherwise ignore in larger areas,” Boyle says.

But still, Boyle wanted to see if these changes in eating and behavior might be affecting stress in animals. Boyle connected with biologist Noé de la Sancha at the Field Museum in Chicago, who had been doing work on forest fragments in Paraguay. The researchers took a closer look at smaller mammals like rodents and marsupials in forest remnants, specifically evaluating stress levels in individual animals. To do that, they examined glucocorticoid concentrations — a steroid that indicates stress in organisms.

The team trapped animals in six areas of the Tapytá Nature Reserve in southeastern Paraguay. Some areas of this reserve had been logged while others had cattle ranching. Others still had large tracts of continuous forest.

They found that rodents and marsupials responded very differently to fragmented land areas in the reserve. For example, some marsupials like Tate’s woolly mouse opossum were scarce in more fragmented areas.

But the species that were found in large enough numbers in both fragmented areas and continuous forests had greater stress levels. Glucocorticoid concentrations were much higher in animals found in the fragmented areas.

It’s unclear what exactly might be stressing these mammals, but it could involve a lack of food resources or an increased threat from predators due to more visibility and exposure. Stress could also be caused by closer social proximity — animals packed more densely together may fight more or compete more for resources. “If individuals are more stressed, they are stressed for a reason,” Boyle says.

High stress can result in a number of negative outcomes for organisms. Other research has shown that stress can affect the immune responses of species, making them more susceptible to disease or parasites. “In a lot of areas where you have a lot of stress, especially if it’s stress related to food, you can have individuals that aren’t reproducing as much,” Boyle adds.

She says there are also differences in the ways that individual species cope with fragmented habitats. Some species, for example, are more capable of suppressing the glucocorticoids that lead to stress. These animals may be more likely to take risks by running across open areas, which could give them advantages in finding food or other important resources. In that sense, some fragmented areas might still have high levels of animals, but from fewer species.

Her research shows overall that while deforestation might not lead to the immediate disappearing of some species, stress and other impacts caused by fragmentation may still have huge effects on wildlife several generations later. The findings about stress highlight the need to prioritize landscape connectivity for wildlife as a conservation strategy. If species in fragmented areas don’t reproduce at the same rate, populations might dwindle or even become locally extinct.

“If you have individuals in a forest fragment, they might be there in one point in time. But to what extent are they likely to survive and/or reproduce and have their offspring survive and reproduce to have a viable population in the future?” Boyle says.

More From Discover
Environment
From Backcountry to Backyard: Community Snow Observations Wants Your Snow Depth Measurements
Planet Earth
5 of the Best Winter Activities to Do in National Parks
The Sciences
How a Zombie-Ant Fungus Can Infect a Host
Environment
Hiking With Your Dog Off-Leash Could Create Problems for Nature
Health
Here's How Cooking Fumes Can Harm Your Health
Planet Earth
The Home Planet as Seen From Space in 2022
Recommendations From Our Store
My Science ShopDiscover STEM Kits
My Science ShopDiscover 2022 Calendar
My Science ShopStrange Science
My Science ShopElements Flashcards
Shop Now
Stay Curious
Join
Our List