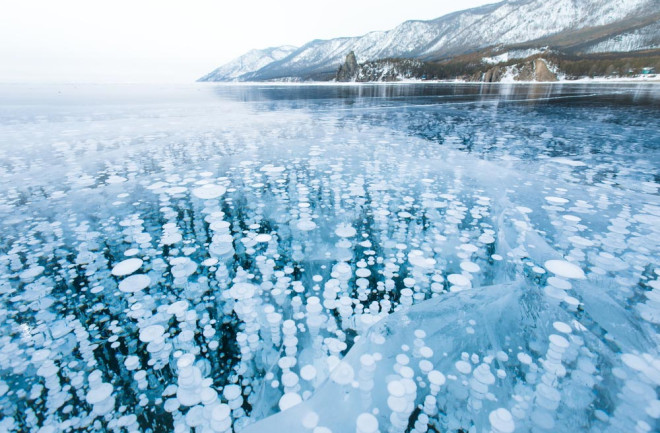 Methane bubbles up from below a lake. (Credit: Strelyuk/Shutterstock) Turkey’s Mount Chimaera is on fire, and has been for millennia. Dozens of campfire-sized flames burst straight of the mountain’s rocky, sea-facing slope. These eternal flames are fueled by methane, the odorless, colorless substance that provides much of our natural gas for fuel, as well as a potent greenhouse gas. Most methane (a single carbon atom surrounded by four hydrogens) forms from the decay of ancient plants, animals and other life. But the Earth itself can create methane, too. When water reacts with a mineral called olivine in certain types of rocks, it releases hydrogen gas. This hydrogen reacts with a carbon source like carbon dioxide to form methane. Scientists call this kind of methane “abiotic” because it can happen without any lifeforms present. And scientists are finding more and more of it, researchers announced Monday. What's more, they've also discovered that some of sources of suspected abiotic methane are actually also created with help from life. The find rewrites the textbook description of methane formation, and it also reiterates that not all deep hydrocarbons come from what people typically think of as fossil fuels. But it could be good news for the fossil fuel industry, too, researchers say. “Abiotic methane would of course be of great potential value economically given that natural gas is very likely to be a key source of energy for another 50 years or so at least,” said Edward Young, a geochemist at the University of California Los Angeles and member of the Deep Carbon Observatory. This network of scientists have been on a decade-long mission to discover how carbon that's stored deep in the earth affects life on the surface.

As part of this latest study, the researchers collected methane samples from around the world, including a sandbar in eastern Colorado, Mount Chimaera in Turkey and deep gold mines in South Africa, among other places. Then they analyzed the gas’ chemical components. Different isotopes, versions of the same element with different numbers of neutrons, revealed how the methane formed. "Using the pairings of heavy isotopes in methane gas (different atomic weights of carbon and hydrogen comprising the methane molecule), we can now tell how a methane molecule was built, including its temperature of formation and/or its reaction pathway," Young explained. To the scientists’ surprise, the investigation revealed that microbes actually help make abiotic methane. Microorganisms deep in the earth consume hydrogen and produce methane. "We can tell that there are instances where we thought abiotic reactions were making methane, but instead it was in part due to the activity of microbes," Young said. The discovery uncovers a chicken and egg conundrum: which came first, abiotic methane or the microbes? "We went into this project thinking we knew how abiotic methane formed,” Young said in a statement. “What we're learning is that it is much more complicated, and the biggest key is hydrogen.” Once they get a better grasp on how rocks make the hydrogen that gets incorporated into methane, Young said, scientists will be a lot closer to knowing how much abiotic methane there is on Earth and how much the microbes deep in the earth produce.

The techniques Young and colleagues used to determine the source of methane on Earth could also shed light on the possibility of extraterrestrial life. Researchers discovered methane in the atmosphere of Mars, and there's been a debate recently as to whether it was produced by living organisms or not. Now Young and colleagues with the Deep Carbon Observatory can begin to help answer the question of whether the methane came from reactions between water and rocks deep in the planet’s crust or a more exciting source, like microbes.