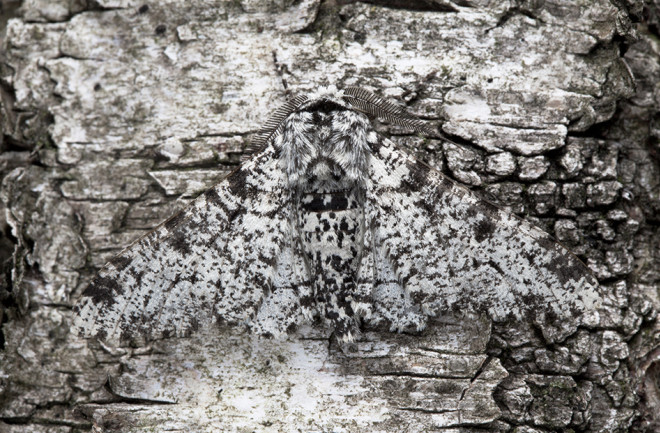 The peppered moth easily camouflages onto the bark of a birch tree near Derbyshire in the United Kingdom. | Alex Hyde/NaturePL.com

Scientists have finally pinpointed the genetic mutation that made the peppered moth a Biology 101 fixture.

When the Industrial Revolution caked British cities with soot, peppered moths’ light, speckled wings made them easy targets for predators. As a result, a dark-winged variant emerged that could hide in a carbon landscape. Within a century, all-black moths replaced the speckled variety.

To uncover the underlying genetics of this quintessential example of natural selection, University of Liverpool scientists crossbred lines of black and speckled moths. Their genetic mapping technique identified DNA segments unique to black moths. And eventually, they converged on their target: a transposon, or so-called “jumping gene,” which can move from one place on the genome to another, causing mutations. The team’s models revealed that the “jump” likely occurred around 1819 — the midst of coal-fired industrial might.

How this mutation alters wing colors is still a mystery, but the discovery helps decipher the nuts and bolts of evolutionary adaptation.