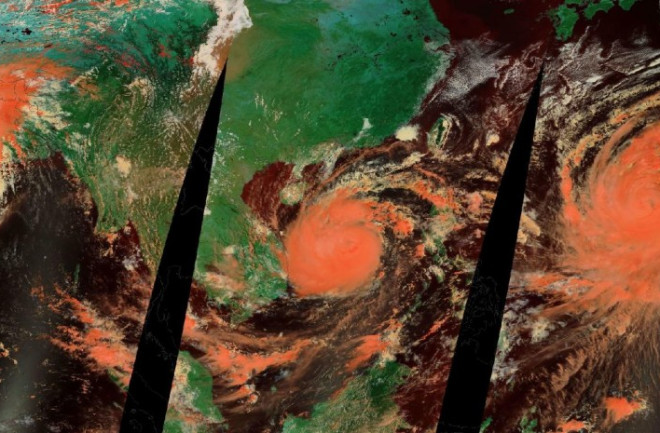 Three cyclones are visible in this false-color mosaic of satellite images captured by NASA's Terra satellite on October 13, 2013. From left to right: Tropical Cyclone Phailin, Typhoon Nari, and Typhoon Wipha. (Image: NASA) As Tropical Cyclone Phailin was slamming into the northeast coast of India on Saturday, two other very dangerous storms were churning in waters of the Asia-Pacific region. The MODIS instrument on NASA's Terra satellite captured the action in the mosaic of images above. I chose this false color scheme (the 3,6,7 band combination) because the peach and reddish-orange tones emphasize small ice crystals in clouds that tower high into the atmosphere. Meteorologist Jeff Masters estimates that Phailin probably had sustained winds of 125 to 130 mph at landfall, which would have made it a Category 3 storm. Thankfully, it appears that a mega-disaster was averted by the largest evacuation effort in Indian history. More than a million people were moved out of harm's way.

Typhoons Nari (left) and Wipha (center) as of Sunday night . (Animation: CIMSS) Meanwhile, Typhoon Nari, which killed 13 people in the Philippines on Friday, is now headed for landfall in Vietnam on Monday, where it may come ashore as a Category 1 storm. You can see it at the extreme left side of the animation at right. (Click on the thumbnail for a larger view.) Typhoon Wipha, currently a Category 4 storm is moving toward Japan. It's in the center of the animation. As the projected track shows, the current forecast calls for Wipha to skirt Japan's coast as it recurves out to sea. But it could spell trouble for the stricken Fukushima nuclear complex.