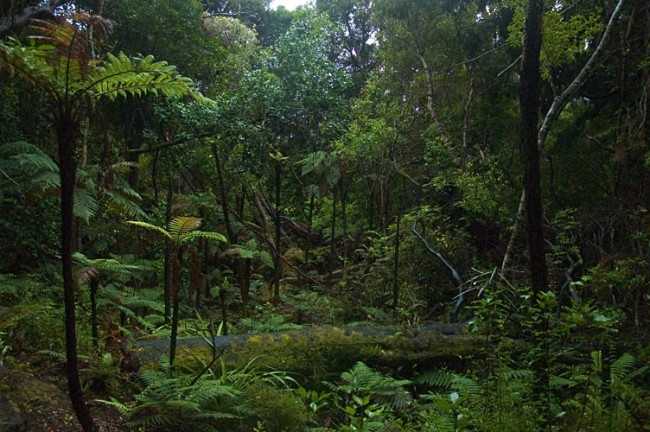 It's clear that cutting down rain forests to plant crops, however fulfilling in the short-term for a farmer, is a disaster for the millions of species living there. But it could also, in the long term, be a disaster for the farmer. A recent study

in Nature combines rainfall data, satellite images showing tree cover, and atmospheric modeling to show that air that has passed over tropical forests often carries at least twice as much water as air that's passed over less leafy land. That means that large-scale cutting of rain forests can result in catastrophic drought for hundreds of miles around. Tropical trees act as enormous water pumps, drawing gallons and gallons of water up from deep in the soil. They release it into the air above them through their leaves, and rain brings it back to earth again some time later, sometimes hundreds of miles away. Using satellite data, this team of researchers from the University of Leeds divided tropical land around the world up into a grid and calculated the leaf-covered area of each square. Then, using rainfall data and an atmospheric model to trace air's progress over the course of ten days, they calculated the amount of rainwater that had its roots in each square. They found that the majority of forested land in the tropics tends to produce at least twice as much rain as deforested areas. This finding resolves a divide between what atmospheric models have predicted and what researchers have observed when it comes to rainfall. Models had predicted less rain in cleared areas, but in practice, it seemed to rain more there, at least at first. This work, since it looked at where water was coming from, not just where rain was falling, shows that what's happening is that the moisture-laden air over the forest gets pulled over the drier, tree-less areas, which suck the moisture out as rain. More rain occurs over the dry patches at first, but at the cost of stripping water from surrounding forest. Extrapolating from their findings, the scientists estimate that with current deforestation predictions, the dry season rainfall in the Amazon will shrink by up to 21% over the next 38 years. Another reason, on top of so many before, to leave the rain forests intact.