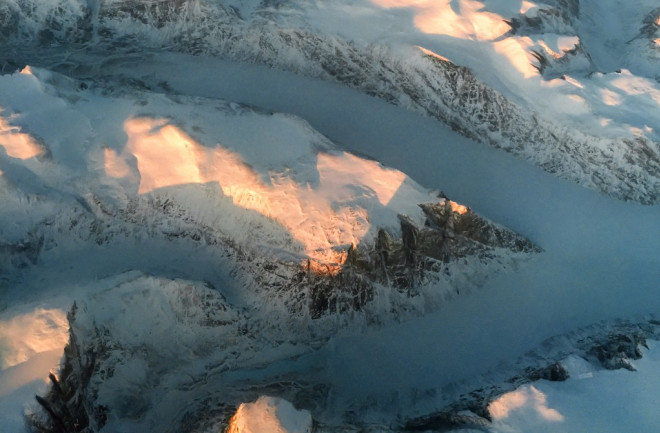 A view of crisscrossing glaciers on Canada's Baffin Island as seen out the window of a 747-400 on Jan. 23, 2015. (Photo: ©Tom Yulsman) Pic of the Day For a flight back from Europe on Jan. 23, I knew our great circle routing would take us very far north. So I made sure to snag a window seat in hopes that I'd get a chance to shoot some photos of ice sheets, glaciers and sea ice. I wasn't disappointed. I shot the photo above with my iPhone as we cruised over Auyuittuq National Park of Canada on Baffin Island. We had just crossed over the Davis Straight from Greenland and had made landfall in North America. I was struck by the lighting and the crisscrossing glaciers. This area is very close to the Arctic Circle, so the day was only four hours long. That meant it was close to sunset when we were passing overhead — and the light was simply magical. I decided to publish this as a Pic of the Day after seeing a pair of images of crisscrossing glaciers in Greenland on NASA's Earth Observatory site. Here's one of them:

An aerial photo of Leidy Glacier, Greenland. (Source: Donald Broce via NASA Earth Observatory) It's an aerial photo shot by NASA pilot Donald "Stu" Broce, who was flying overhead in an ER-2 aircraft in April, 2012 during a research flight over the Greenland ice cap. The crisscross pattern immediately reminded me of what I had spotted on my flight over Baffin Island. Here's a satellite view of the same region photographed by Broce:

The view of the region pictured above was acquired August 7, 2012, by the Advanced Spaceborne Thermal Emission and Reflection Radiometer (ASTER) on NASA's Terra satellite. (Source: NASA Earth Observatory) Here's how NASA describes what we're looking at:

Located in the northwest corner of Greenland, Leidy Glacier is fed by ice from the Academy Glacier (upstream and inland). As Leidy approaches the sea, it is diverted around the tip of an island that separates the Olriks Fjord to the south and Academy Cove to the north. The resulting crisscross pattern is simply the result of ice flowing along the path of least resistance.

During my flight home I shot many other photographs of the landscape below. I hope to share some of them as future Pics of the Day.