Crimea as Seen in Satellite Images 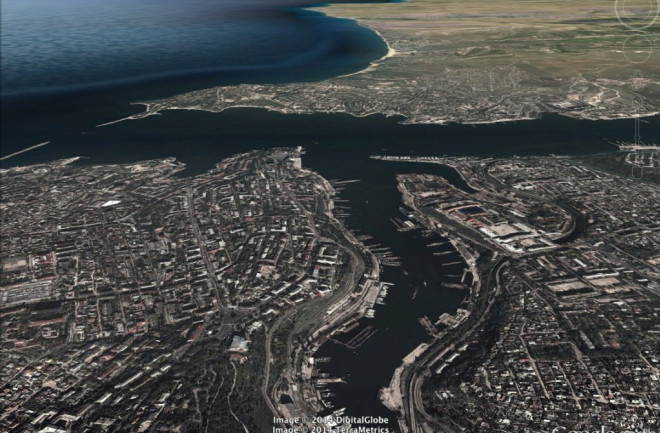 A Google Earth image of Sevastopol on the Crimean Peninsula, home of the Russian Black Sea Fleet. (Source: Google Earth) As I'm putting this post together, Ukraine has put its military on high alert, and Russian troops along with other forces have surrounded a number of Ukrainian military bases on the Crimean Peninsula — home to Russia's Black Sea naval fleet. Just a week after the end of the Sochi Olympics, the Russians have invaded Ukraine, and so there is now a risk of war in Europe. Hard to believe. This isn't a typical kind of topic for ImaGeo, but I thought I'd approach it by providing some remote sensing imagery of the region, and particularly Sevastopol, which has obvious military importance to the Russians, who have a long-term lease from Ukraine on their naval base there. In the image above, you can see multiple ships docked in the harbor — many of them Russian naval vessels. How strong is the force there? Here's how Mark Galeotti, author of “Russian Security and Paramilitary Forces Since 1991,” and a professor at New York University, answered this question in a Q&A with the Washington Post:

Q. How strong is Russia’s Black Sea Fleet?A. As a war-fighting force, it’s not particularly impressive. Its main vessel was basically built to fight other ships and so is only useful in fighting a naval war. It’s got the Moskva, an aging guided-missile cruiser; a large anti-submarine warfare cruiser — very dated; a destroyer and two frigates, which are more versatile; landing ships; and a diesel attack submarine. It’s not a particularly powerful force. The Italian navy alone could easily destroy it.

The port city of Sevastopol is seen here in a photograph taken on Expedition 20 of the International Space Station in 2009. (Source: NASA) The city of Sevastopol spreads out along the deep indentation on the Black Sea coast seen in this photograph shot by an astronaut aboard the International Space Station. From this perspective, its utility as a naval base seems pretty clear.

The entire Crimean Peninsula is seen in this image acquired by NASA's Terra satellite on June 10, 2013. (Source: NASA) This isn't the first time that Crimea has been invaded by foreign forces. Far, far from it. It belonged to both the Greek and Roman empires many centuries ago. At that time it was known as Taurica. And that's just the start of it. As a good backgrounder in the Washington Post puts it:

These weren't the only outside forces that dominated Crimea, and at other points in its past it has been invaded or ruled by Gothic tribes, the Kievan Rus' state, the Byzantium empire and the Mongols, among many others. From the mid-1400s it existed as the Crimean Khanate, a protectorate of the Ottoman Empire, during which time it became the center of a roaring slave trade.

The Crimean War left the peninsula in control of Russia in the mid-1800s. After the Russian Revolution, it became an autonomous region of the Soviet Union (with a very brief interlude as an autonomous state). The Nazis occupied the peninsula during WWII, and Sevastopol was nearly destroyed during fighting there. The Red Army pushed the Nazis out in 1944 — and the Soviets proceeded to deport the region's Tartars to Central Asia. Many died along the way. The Tartars were allowed to return after the fall of the Soviet Union. Not surprisingly, there is no love lost between them and the ethnic Russians on the peninsula, who make up more than 50 percent of the population now.

A Google Earth view of Crimea's broad geographical context. (Source: Google Earth) Lastly, this broad view gives a sense of Crimea's strategic importance. For the Russians, the base at Sevastopol is one of just three that provide access to the world's oceans. The others are in the Murmansk region on the Barents Sea, and Vladivostok on the Pacific Ocean. Let's hope the current situation doesn't spin out of control. There's been enough blood spilled in this part of the world. Here are some other articles worth reading on this developing situation: "Among More Signs of Russian Force in Crimea, Delight Mixes With Dismay," New York Times. "Putin's Playbook: The Strategy Behind Russia's Takeover of Crimea," The Atlantic.