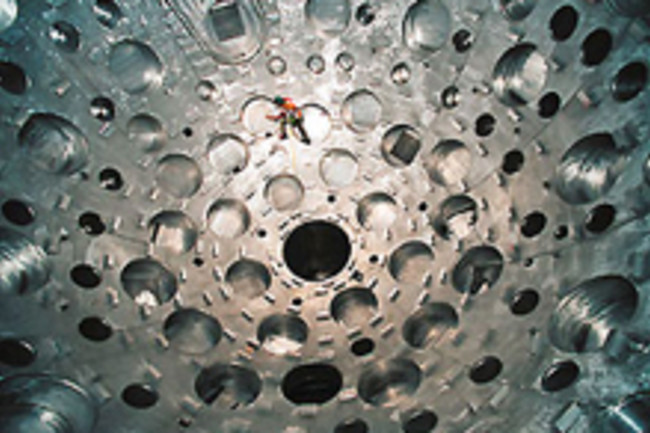 Luminaries gathered today at a lab in Livermore, California to toast the opening of the National Ignition Facility, a massive physics experiment aiming to recreate the reaction that takes place in the hearts of stars: nuclear fusion.

“Bringing Star Power to Earth” reads a giant banner that was recently unfurled across a building the size of a football stadium [The New York Times].

Scientists are now ready to begin firing the world's most powerful laser, comprised of 192 separate beams, at a target the size of a match head. Yet for all the celebration and hoopla, doubters note that there's no guarantee that the fusion researchers will achieve their goal.

The project’s director, Ed Moses, said that getting to the cusp of ignition (defined as the successful achievement of fusion) had taken some 7,000 workers and 3,000 contractors a dozen years, their labors creating a precision colossus of millions of parts and 60,000 points of control, 30 times as many as on the space shuttle. “It’s the cathedral story,” Dr. Moses said.... “We put together the best physicists, the best engineers, the best of industry and academia” [The New York Times].

The project has also cost at least $3.5 billion. NIF's researchers will spend the next year gradually increasing the energy of the laser beams, and say serious ignition experiments will begin next year. NIF

aims to trigger a tiny thermonuclear explosion inside the huge target chamber, a blast sparked by the lasers, which bounce off a series of lenses and mirrors, intensifying and multiplying with each pass. "Pretty soon you have a lot of 'em," says Moses, "and we have enough energy to drive our targets, to a point where they get to over 100 million degrees and it's a pretty warm day" [Fox News].

The facility has three purposes: to conduct experiments that will help U.S. defense agencies understand how nuclear weapons function as they age, to allow astrophysicists to get up close and personal with the reactions that take place in stars and supernovae, and to determine whether nuclear fusion power plants are feasible. It's the third goal that has sparked the popular imagination, as a nuclear fusion plant

While Moses and the NIF's other boosters seem confident that they'll achieve fusion reactions that release more energy than it takes to produce them, many doubters remain.

“I personally think it’s going to be a close call,” said William Happer, a physicist at Princeton University who directed federal energy research for the first President George Bush. “It’s a very complicated system, and you’re dependent on many things working right.... There’s plenty of room,” he added, “for nasty surprises” [The New York Times].