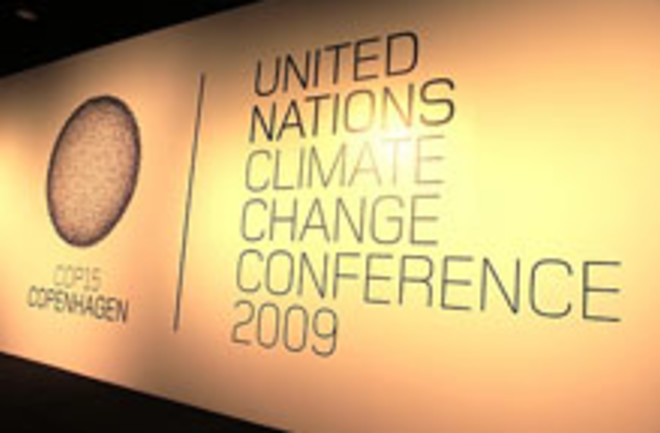 Things are getting a tad testy in Denmark as the Copenhagen climate summit lurches toward its conclusion tomorrow. Contrary to rumors that he would skip the event because of the growing pessimism about reaching an agreement, President Barack Obama says today that he's on his way for the conference's decisive day. Yesterday was protest day, as 4,000 people marched around the Bella center and police arrested 260.

Activists tried a variety of methods to enter the conference centre, approaching in large groups from several directions and, at one point, sending several hundred people running with seven giant lilos [air mattresses] to bridge a moat next to the centre [The Guardian]

. They were not successful, but that didn't stop the conference from grinding to a halt. The Group of 77, the broad group of developing and emerging nations, railed against the wealthier nations' proposals.

China, by far the largest economic power in the group, has dragged its feet throughout the week by raising one technical objection after another to the basic negotiating text [The New York Times]

. More than 100 countries staged a walkout Monday to draw attention. The United States had been quiet and non-committal during most of conference, as developing countries and European leaders talked about starting a fund for wealthier countries to help the rest of the world lower greenhouse gas emissions. Then this week Sen. John Kerry acknowledged the responsibility, which was followed by a major American announcement.

Secretary of State Hillary Clinton appeared in a crowded press briefing room at the summit and announced that the United States would contribute to a $100 billion international fund starting in 2020—as long as "all major nations" commit their emissions reductions to a binding agreement and submit those reductions to transparent verification. And by "all major nations," she meant China [The Atlantic]

. President Obama, fresh off receiving the Nobel Peace Prize, returns to Scandinavia tonight to try to reach an agreement during the final day in Copenhagen,

White House press secretary Robert Gibbs says. The president still believes that “the elements are there to get an agreement,” Mr. Gibbs said. It would be a political agreement for a future treaty, he said, rather than a binding agreement [The New York Times]