Whether rain or shine, geothermal power is always available and has the potential to save the climate. So, what is stopping us from utilizing it? 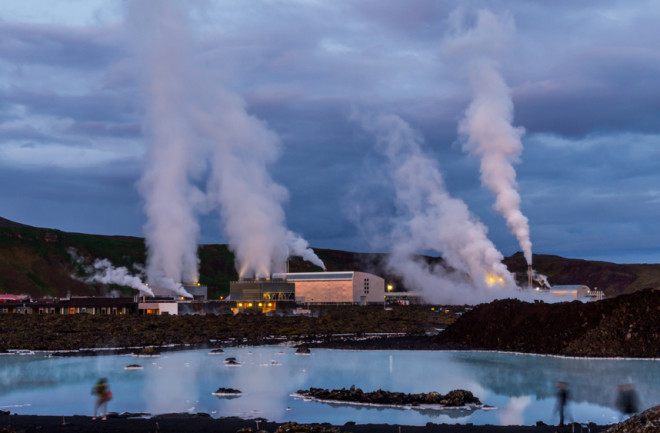 The Svartsengi power plant is the first geothermal power plant in the world to combine generation of electricity and production of hot water for district heating. (Credit: Kirill Chernyshev/Shutterstock)

The National Renewable Energy Laboratory projects that geothermal energy could provide the U.S. with an inexhaustible supply of energy for billions of years to come. This term, geothermal, comes from the Greek words geo (earth) and therme (heat). Hence, we're talking about literally drawing steam and hot water from inside the Earth as an energy source. Because heat is continuously produced inside the Earth, this resource is considered a renewable energy source. In the U.S., dozens of power plants are now harnessing this energy, and tens of thousands of homes are adding geothermal technology each year.

The slow decay of radioactive particles in the Earth's core, a process that happens in all rocks, produces geothermal energy, according to the U.S. Energy Information Administration (EIA). People can capture this energy to heat buildings and generate electricity. While geothermal energy is used in over 20 countries, the U.S. is the largest producer of geothermal energy in the world.

The deeper you go into the Earth, the hotter things get. That's because the Earth’s compressed crust and core is full of heat. We can access this geothermal energy by digging deep wells and pumping the heated underground water or steam to the surface. Both geothermal power plants and heat pumps can harness this energy.

Geothermal power plants drill wells 1 or 2 miles deep to access water for conversion into electricity. When the water reaches the surface, the pressure drops causing the water to turn into steam. This steam spins a turbine which is connected to a generator to produce electricity.

Geothermal heat pumps tap heat closer to Earth’s surface and can be installed for heating and cooling homes and other buildings. This system transfers heat by pumping water or a refrigerant (a special type of fluid) through pipes just below the Earth's surface and connected to the structure.

During the winter, the water or refrigerant absorbs warmth from underground while the pump brings this heat to the building above. In the summer, heat pumps can run in reverse and help cool buildings.

Geothermal energy can also find its way to the surface in the form of volcanoes, springs and geysers. The most active geothermal resources are usually found along major plate boundaries where earthquakes and volcanoes are concentrated. Most of the geothermal reservoirs in the U.S. happen to be found in the western states, Alaska and Hawaii.

The environmental effects of geothermal energy depend on how this resource is accessed and used. For instance, direct-use applications and geothermal heat pumps in homes have almost no negative impact on the environment, while geothermal power plants can have some side effects. Here's how these methods differ:

Heat Pumps: This equipment has a long life expectancy, typically more than 20 years, according to the U.S. Department of Energy. That means you can get significant longevity out of heating and cooling systems that use this method, especially since the underground infrastructure that heat pumps connect to can last up to 50 years.

Direct Use: Direct-use applications tap into hot water from springs or reservoirs located near the surface of the Earth. These rare, naturally-occurring sites are extra valuable because they can be used for bathing, cooking and heating buildings with minimum effects on the environment.

Power Plants: Geothermal power plants can run 24/7 off of their constant fuel source, making them a great source of renewable power. Most of these plants also inject the geothermal steam and water that they use back into the Earth. This recycling can be beneficial to the environment by renewing the geothermal resource and reducing emissions from the plant itself. However, these sites can release small amounts of sulfur dioxide and carbon dioxide into the atmosphere. Regardless, according to the EIA, geothermal power plants emit 97 percent less acid rain-causing sulfur compounds and about 99 percent less carbon dioxide than fossil fuel power plants of similar size.

Currently, the U.S continues to generate the most geothermal electricity in the world. And yet, it currently accounts for just 0.4 percent of net electricity generation in the country, according to University of Michigan’s Center for Sustainable Systems. So, what has prevented this alternative energy source from taking off?

Despite the benefits described above, additional drawbacks and hurdles to geothermal resources include location constraints, infrastructure cost, potential emissions and earthquake risks. Here's what we know about each of those variables:

Location: Though there is geothermal energy beneath the entirety of the Earth’s surface, not all of it can be utilized. In fact, only a small percentage of land lies above suitable pockets of water and steam that can be used as an energy source. This limits where you can install geothermal power plants and allows this technology to thrive only in certain parts of the world. The most active geothermal resources are typically found along major tectonic plate boundaries where most volcanoes are located. The Ring of Fire, which encircles the Pacific Ocean, is one of the most active geothermal areas in the world.

Cost: Geothermal energy is an expensive resource to tap into. According to the Office of Energy Efficiency and Renewable Energy, the initial cost for the field and power plant is around $2,500 per kilowatt in the U.S. Though the initial cost of geothermal power plants is high, geothermal energy systems require little maintenance and minimal operation once installed. So they can prove to be cost effective in the long run.

Emissions: Although geothermal energy does not typically release greenhouse gases, there are gases stored under the Earth’s surface, which can be released into the atmosphere during the digging process. Geothermal energy reservoirs can also contain traces of heavy toxic metals. Though these emissions are far lower than those associated with fossil fuels, its effects can still be harmful for the environment.

Earthquake Risk: Many of the places that are ideal for tapping into geothermal energy are also located in areas that are extremely tectonically active. This poses a constant risk of earthquakes, causing corporate concerns when it comes to installing large-scale power facilities. According to the Union of Concerned Scientists, earthquake risk associated with enhanced geothermal systems can be minimized by locating plants an appropriate distance away from major fault lines. In addition, constant monitoring is required when a geothermal system is built near a heavily populated area.

While there are certain limitations to utilizing geothermal energy across the globe, it is evident that this energy source has the potential to significantly benefit the environment and pave the way for converting to purely renewable power.