Waste heat from power plants could be twisted into a nonpolluting source of energy. 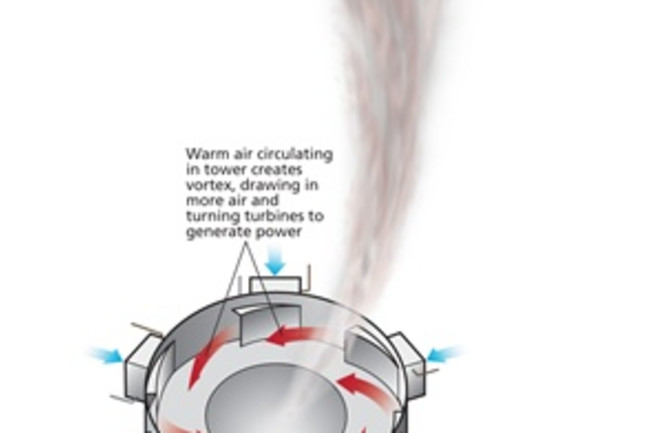 Tornadoes may be destructive, but even funnel clouds have a silver lining. Inspired by the process that creates natural twisters, electrical engineer Louis Michaud of Canada’s AVEtec Energy Corp. designed a nonpolluting source of swirling power he calls the Atmospheric Vortex Engine. The device can spin waste heat from power plants into usable energy.

Instead of directing excess heat into conventional cooling towers that simply disperse it into the air, power plants could usher the heat into the hollow, open-topped tower of a vortex engine. A heat exchanger outside the tower transfers the extra heat (piped in as warm water) to ambient air.

When this warmed air is directed into the tower at an angle, it encounters cooler air and produces a circular current. This current funnels air upward into a controlled twister whose low-pressure center draws more air into the tower, turning turbines at its base. These turbines drive a generator much like a wind turbine does, except, as Michaud says, “You’ve got more oomph to push it with.”

Michaud has already demonstrated working models of the engine up to 15 feet across, but the real deal would measure 300 feet wide and half as tall, capable of producing tamed twisters that stretch nine miles high. When hooked up to the average 500-megawatt natural-gas or coal power plant, the vortex engine could produce an extra 200 megawatts of energy just by putting the excess heat to use.

At a cost of less than 3 cents per kilowatt-hour, tornado energy is cheaper than burning coal (which rings up at 4 or 5 cents per kwh) and produces no additional greenhouse gases.

[This article originally appeared in print as "Tornado Tech."]