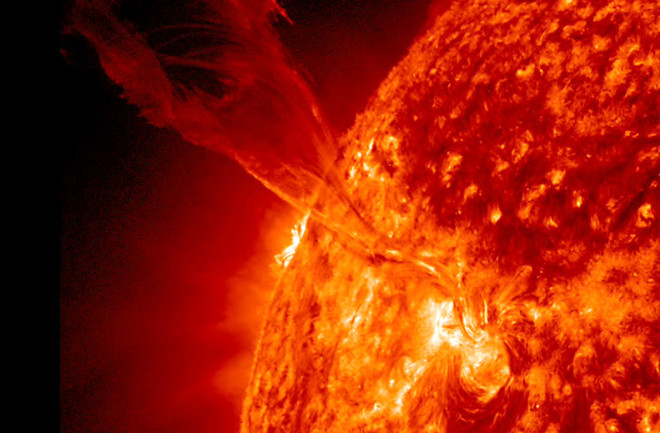 An eruption of plasma above the Sun's surface on Jan. 31, 2013 formed a long loop that ultimately stretched and then burst outward into space, as seen in this image from NASA's Solar Dynamics Observatory spacecraft. (Source: NASA SDO) Willie Soon, a prominent global warming skeptic, says "no amount of money can influence what I say or do or research or write." If recently released documents are accurate, he is a liar.

During a lecture on climate change in 2013, Willie Soon, a prominent skeptic of human-caused climate change, pointed to a large image showing an explosion of plasma from the Sun and then said that he was "fed up" with the scientific consensus on climate change:

They say it is always the CO2. The Sun could never do it, the Sun. You know it is changing so little, it doesn't do anything. That's what they say. I really don't understand the argument."

Willie Soon. (Screenshot from Vimeo video.) In the lecture, he then goes on to say that "the Sun is a primary driver of climate change and requires to be studied." If documents acquired under the Freedom of Information Act by the environmental group Greenpeace are accurate, Soon has been on the payroll of large corporate donors who have a lot to gain by blocking measures to reduce humankind's emissions of heat-trapping greenhouse gases implicated in global warming. Greenpeace and a second group, the Climate Investigations Center

, shared those documents with news organizations last week, including the New York Times and The Guardian. After reviewing the documents, here's what the Guardian is reporting

A prominent academic and climate change denier’s work was funded almost entirely by the energy industry, receiving more than $1.2m from companies, lobby groups and oil billionaires over more than a decade, newly released documents show.

that Soon accepted this money:

. . . while failing to disclose that conflict of interest in most of his scientific papers. At least 11 papers he has published since 2008 omitted such a disclosure, and in at least eight of those cases, he appears to have violated ethical guidelines of the journals that published his work.

And then there is this from the Times:

The documents show that Dr. Soon, in correspondence with his corporate funders, described many of his scientific papers as “deliverables” that he completed in exchange for their money. He used the same term to describe testimony he prepared for Congress.

Though Dr. Soon did not respond to questions about the documents, he has long stated that his corporate funding has not influenced his scientific findings.

He made that same claim in his lecture in Minnesota. "I kind of tend to find that quite a lot of the people who call themselves scientists, they really are not independent," Soon said. But he is, "which means no amount of money can influence what I say or do or research or write. So on and so forth. It has nothing to do with money. It's about a quest for the truth, nothing but the truth." If those news reports citing the documents acquired under the Freedom of Information Act are accurate, then I don't see how you can reach any conclusion other than Soon has been lying. For the record, the Intergovernmental Panel on Climate Change has assessed both natural and human-caused drivers of climate change, including the Sun. In the argot of climate science, these contributions are measured in terms of "radiative forcing," or RF. A positive radiative forcing leads to surface warming, whereas a negative RF has the opposite effect. What has the IPCC found? Between the dawn of the industrial era in 1750 and 2011, the major greenhouse gases we've added to the atmosphere during that period have increased radiative forcing by 3.00 watts per meter squared (with a range of uncertainty of 2.22 - 3.78). By comparison, changes in the amount of energy reaching us from the Sun have caused an increase in radiative forcing of just 0.05 watts per meter squared (with uncertainty ranging from 0.00 to 0.10). That's a tiny fraction of the influence coming from greenhouse gases. The IPCC also points out that between 1986 and 2008, the radiative forcing from the Sun actually declined — even as large amounts of heat continued to buildup up in the Earth's climate system. (To read the report, go here

. Warning: It's a big file.) https://vimeo.com/63785021 If you're inclined to hear Willie Soon's claims to the contrary, you can watch his 2013 lecture in the video above. Just keep in mind that it appears to have been bought and paid for by the energy industry.