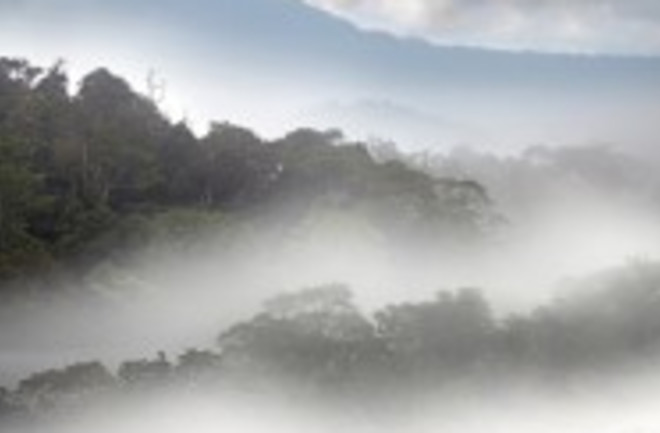 A tropical jungle in the highland of Gunung Raya, Langkawi Island. Image courtesy of Gwoeii /shutterstockWhat causes wind? Any elementary science textbook will tell you it's about pressure differences: Hot air rises and cool air rushes into the void, creating wind in the process. This is the driving force of our climate system as a whole. The existing paradigm relies on temperature alone to create these pressure differences, but new numbers suggest that a much less conspicuous driver of air movement---condensation---may actually be dictating the planet's weather patterns. Weather patterns are controlled by changes in atmospheric pressure. Since temperature changes can trigger these pressure changes, scientists have relied solely on temperature when making their climate models. But a few years ago a group of physicists proposed another mechanism for changes in atmospheric pressure: a change in the number of gas molecules in the air. The mechanism itself was well-recognized in scientific circles. The number of gas molecules fluctuates with the evaporation and condensation of water vapor. But the idea of condensation playing a significant role in the climate system was pretty controversial. The physicists decided to whip up some formulas to see just how much it mattered. They concluded that condensation, not temperature, is actually the main driver of the climate system, according to their calculations [pdf], which were published in Atmospheric Chemistry and Physics last week. Such a conclusion could lead to major revisions of the climate model as well as new perspectives on how people impact it. If condensation is as important as their results suggest, deforestation and a drying climate could have a much more significant impact on our planet than previous climate studies have suggested. But this round of results, like the one before it, are still being debated.