Concerning news for California: El Niño's misbehavin'. But there is still time for him to do the right thing

In this animation of false-color satellite images of California's central Sierra Nevada range (which runs diagonally through the frames), red and orange tones are indicative of snowpack. On Feb. 5, 2016, snowpack in the area stood at 110 percent of average for the date. By Feb. 16, it had dropped to 91 percent. In the images, acquired by NASA's Terra satellite, Lake Tahoe is in the upper center; Mono Lake is toward the lower right. (Images: NASA Worldview. Animation: Tom Yulsman) Woops. Thanks to a dearth of precipitation combined with warm temperatures, snowpack in California's Sierra Nevada mountains has dipped below average. Given that El Niño was supposed to be California's great drought-bustin' hope, this is a little concerning. I put together the animation above to show what has happened in the Sierra over the past two weeks. The mountains run diagonally through the frames. The animation consists of false-color images captured by NASA's Terra satellite. Snow is rendered in red and orange tones so that it can be discerned easily. Water shows up in almost black tones, and you can easily see Lake Tahoe in the upper middle of the animation. Mono Lake on the east side of the Sierra is at lower right. On Feb. 5, 2016, the snowpack in the central Sierra Nevada region stood at 110 percent of average for the date. By Feb. 16, it had shrunk to 91 percent. That's a decrease of 17 percent in just two weeks — as dramatized by all that shrinking red and orange in the animation. As I'm writing this on the 17th, the average for the entire Sierra Nevada range in California is at 91 percent for the date. Given the super El Niño now underway, one would have hoped for better than that. It's not unheard of for El Niño to misbehave for a spell. As the National Weather Service pointed out in a Tweet on Feb. 9, California usually does experience some dry periods even during El Niño winters: https://twitter.com/NWSSacramento/status/697119968970698752 But since they Tweeted that, another nine days went by without significant precipitation in the mountains. And while the Sierra is getting a nice dump today (Feb. 18), high pressure is forecast to build right back in — and the forecast for the following 10 days isn't too encouraging. What about the big picture? How have things been shaping up compared to what we might have expected? Again, over the relatively short term — about 30 days — the word "misbehavin'" still seems to apply. The odds are that during an El Niño, and particularly a strong one like the current one, precipitation will be above normal along the southern tier of the United States, from California east through Texas and on into the Southeast. But for the past 30 days, the pattern looks strangely opposite to that.

The first frame in this animation shows how precipitation departed from the long-term average in February during the moderate El Niño year of 2010. The second frame shows 30 days ending on Feb. 16, 2016. In some ways, the pattern looks reversed, with drier than normal conditions from Southern California across the southern tier of states through Texas and into Louisiana. (Maps: High Plains Regional Climate Center. Animation: Tom Yulsman) This animation shows just how different the current strong El Niño has been compared to even the moderate El Niño in 2010. During February of 2010, wet conditions generally prevailed across the U.S. southern tier, as expected. By contrast, for the 30 days ending on Feb. 16, the southern part of California has been particularly dry, and so has much of the U.S. southern tier. Here's what the average precipitation pattern looks like for all previous strong El Niños, like the current one: 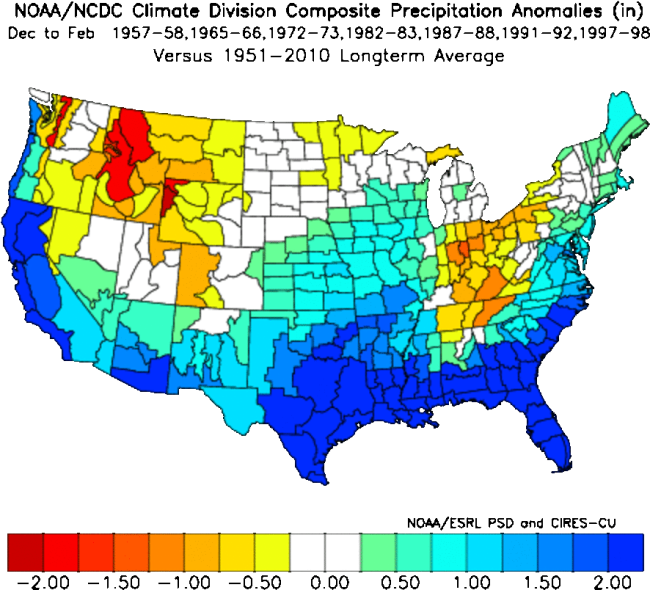 Again, I think you have to conclude that over the relatively short run, the current El Niño certain hasn't been behaving normally. Ordinarily, a strengthened subtropical jet stream tends to sweep a parade of storms ashore in California during an El Niño winter. And that was certainly happening for awhile. But since early February, persistent high pressure has shoved storminess farther north. I created the animation below to show what that looks like:

An animation of visualizations showing the pattern of high and low pressure systems off the California coast between Feb. 1 and 16, 2016. (Imagery source: earth.nullschool.net. Animation: Tom Yulsman) To create the animation, I used the marvelous earth.nullschool.net. This is a visualization of global weather conditions forecast by supercomputers and updated every three hours. Using the archive, I took screen-grabs of day-by-day visualizations showing mean sea level pressure going back to February 1. Then I compiled them into the animation. Those purple-blue colors are indicative of low pressure and associated storminess. The white lines depict winds, and in these areas they are flowing counterclockwise, as is typical in low-pressure systems. The greenish and generally lighter tones are indicative higher pressure. As the animation shows, high pressure began to build off the coast of California on Feb. 1, just as a storm was exiting to the east. And the high pressure generally persisted in that location until, well, today. Let's keep our fingers crossed that when the dryness returns after today's storm it doesn't stick around for too long — and that in a couple of weeks we can finally say this about El Niño: Ain't misbehavin'!