Mount Washington weather observers didn't exactly fly away on 109 mph winds, but from the looks of this video, it could have happened 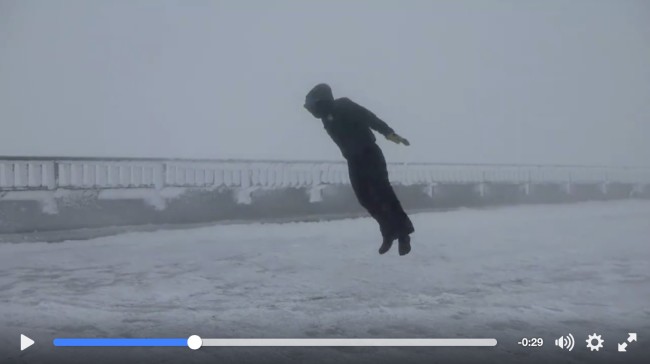 While winds up to 109 miles per hour buffeted New Hampshire's Mount Washington Observatory on May 16, weather observers Mike Dorfman and Tom Padham shot this video on the observation deck. (Source: Facebook/Mount Washington Observatory) Weather observer Mike Dorfman describes the wind that roared across the summit of Mount Washington in New Hampshire yesterday as "blustery." But if you click on the image above to watch the video of what it was like, I'm sure you'll agree that it was much more than that! Dorfman and his colleague Tom Padham shot the video on the observation deck on May 16, 2016, and posted it to Facebook and Youtube. As Dorfman points out in a blog post:

Wind on the summit is an experience that you can’t just describe to understand. It makes you fully appreciate that air is in fact a fluid and not empty space.

The building he and other observers work in is built to withstand much more than 109 mph winds. Until recently, the summit of Mountain Washington held the record for fastest wind gust ever recorded on Earth: 231 miles per hour, on April 12, 1934. That record was overtaken in 1996 with a 253 mph wind in Barrow Island, Australia during Typhoon Olivia. To withstand such mind-boggling power, the observers' building is constructed like few others on Earth. As Dorfman describes it:

The Sherman Adams building has 3 foot thick concrete walls and 3 layers of bullet-resistant glass windows. Even with this protection, the constant, dull roar of the wind is ever-present in the Observatory’s Weather Room.