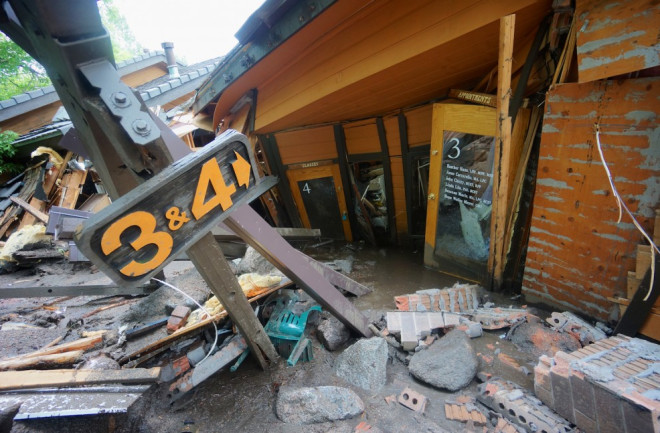 An office building in Boulder, Colorado destroyed by a debris slide late on Friday, Sept. 13, 2013, or early Saturday. (Photo: © Tom Yulsman) In the photograph above, an office building at the mouth of a canyon at the western edge of Boulder, Colorado, sits crushed and sundered. It was ripped in half by an intermittent spring that turned into a rampaging monster of water, mud and boulders sometime during the night between Friday and Saturday. I took many more photos of the devastation here, and also spoke to people who were trying to get their belongings out of the building. I'll try to get a post up about that soon. In the meantime, I thought I'd share the latest numbers illustrating the impacts of the Colorado flooding from the state office of emergency management:

Some of these numbers are likely to get worse, including the death toll, which could climb much higher. And these numbers tell only part of the story. Entire towns have been devastated. In fact, the town of Lyons north Boulder has been all but abandoned, with much of the village devastated by flooding. Countless bridges and roads are washed out. These include an increasing list out on the plains, as well as canyon roads that once provided access to the mountains — and a route out for innumerable people who live in little towns and scattered along dirt roads throughout the foothills. And the environmental toll — contamination from sewage, oil and gas wells, etc. — has yet to be tallied. Stay tuned.