Colorado Deluge: Flooding Before and After as Seen From Space

An animated gif consisting of before and after false-color satellite images of the Denver-Boulder area. Water is black or dark blue; sediment-laden water or muddy ground is pale blue; vegetation is green; and bare earth is tan. (Images: NASA. Animated gif: Tom Yulsman) As I write this on Sunday at 10:30 a.m. from my home near Boulder, Colorado, it is pouring buckets — again. Flood warnings are once again up for a region that has already suffered a 1,000-year rain event, and which is reeling from heart-rending death and destruction. So far, hundreds of people are unaccounted for. Moreover, four people are confirmed dead, but search and rescue has taken precedence over looking for additional victims. So that grim toll is definitely going up, probably significantly. My family and I are safe. Niwot is pretty much high and reasonably dry. The only significant impact we've experienced is a boil-water directive. In the coming days I'll be posting more on the continuing disaster here, including photos I shot of a building that was literally ripped in half by an intermittent spring that turned into a rampaging monster of water, boulders and mud. Also, a piece I'm working on now questioning whether hundreds of oil and gas wells in Weld County that have been affected by flooding are causing contamination of surface waters. I the meantime, I thought I'd post the animated gif above showing what our region looks like in before and after satellite images. Both false-color images were acquired by NASA's Aqua satellite. The first one shows the view from orbit on September 7, before the flooding. The second was captured yesterday, Sept. 14, when the clouds parted for a while to reveal what several days of unprecedented rain have wrought. In the false-color scheme, water is black or dark blue; sediment-laden water or muddy ground appears pale blue; vegetation is green; and bare earth is tan. In the before image, water is barely detectable in the South Platte River and the tributaries leading into it. In the after image, the river's flood plain has filled in with a turquoise blue color. Here's a map of what that flooding likely looks like in a portion of that image, as well as the impact on roads: 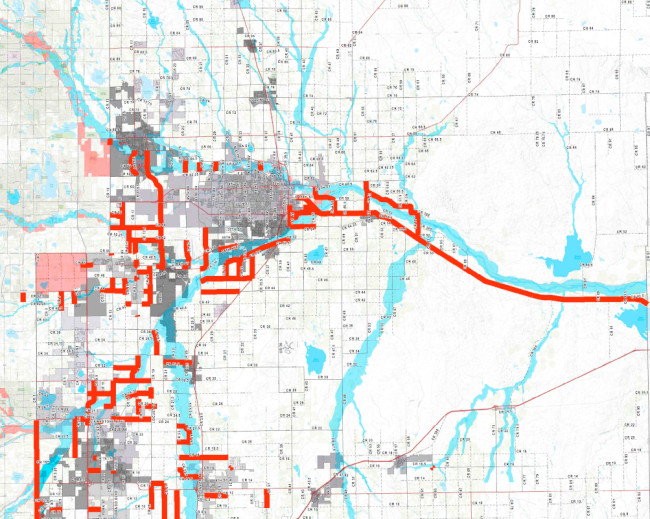 Road closures in Weld County are shown in red. The blue shows the extent of water in a 100-year flood. The city at the confluence of two rivers is Greeley. (Source: Weld County Office of Emergency Management) This map shows the 100-year flood extent for creeks and rivers in Weld County. (In other words, the extent of a once-in-a-hundred year flood, in light blue.) The South Platte River comes in from the south and is joined by the Cache La Poudre River by the city of Greeley.

An interactive online map that allows you to determine the actual flood extent is not working right now, so I'm not sure whether flooding has equaled the 100-year level on these waterways. But given that early this morning, at least one river gauge downstream of Greeley registered flows that surpassed the previous record set in 1965, I think it is very likely a 100-year flood — at least. Click on the thumbnail at right to see that record of that hydrograph. (And click here to access this as well as other hydrographs around Colorado and the nation at the Advanced Hydrological Prediction Service of the National Weather Service.) Channel 7 here in the Denver area has reported that the South Platte has flowed at up to about 500,000 cubic feet per second during this event. I haven't been able to confirm that number yet, but the hydrograph above suggests this number may well be correct. To put that flow in perspective, consider that a cubic foot of water is equivalent to a basketball weighing 60 pounds. So this works out to 30 million pounds of water flowing past a given spot on the South Platte every second.