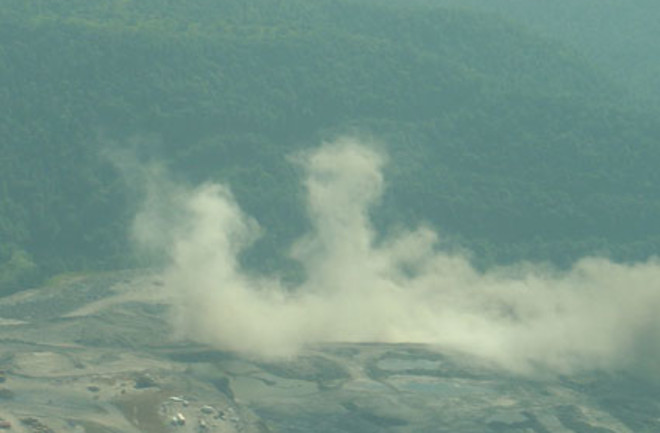 When the Environmental Protection Agency issued new rules in April attempting to crack down on mountaintop removal coal mining, you knew it was only a matter of time before the major push-back arrived. With elections looming and politicians looking to score some points at home, that time is now. Joe Manchin, the Democratic governor of coal-rich West Virginia, says his state will sue the EPA and ask a U.S. District Court to throw out the agency's strict new guidelines. For Mr. Manchin, the timing is certainly good:

Mr. Manchin is running for the U.S. Senate seat, formerly held by the late Democratic Sen. Robert Byrd, against Republican businessman John Raese, who has pulled ahead in some polls. The EPA's policies on mining and climate change are controversial in West Virginia, where coal mining is a major industry supporting thousands of jobs. [Wall Street Journal]

. Mountaintop removal mining, as the name suggests, involves detonating explosives on mountains to access coal deposits. Unsurprisingly, blowing up a mountaintop makes quite a mess, and the debris is often dumped in valleys where it can pollute waterways. That's why the EPA says the technique changed the rules for getting a Clean Water Act permit.

To qualify, companies would have to show that their projects would not cause pollutant concentrations in surrounding waters to climb past roughly five times the normal level. EPA Administrator Lisa Jackson said the rules would protect 95 percent of aquatic life and ban operators from dumping mine waste in streams in nearly all cases. [The New York Times]

) are the EPA's three main reports on mountaintop removal; West Virginia says EPA should have incorporated more peer-reviewed research. You can read the government reports online (1

). Meanwhile, in neighboring Kentucky, the EPA is carrying on with the coal crackdown. The EPA recently blocked water permits for 11 mines that had already gained state-level approval.

In objection letters about the permits from its Atlanta office to the Kentucky Division of Water, the EPA cited the state’s own assessment of poor water quality in the regions where the permits are sought. And it said state regulators, in moving to approve the permits, failed to conduct analyses to determine whether proposed discharges from new surface mining would likely violate state water quality standards. [Louisville Courier-Journal]

And the coal litigation is just getting started: Environmental groups including Appalachian Voices

have announced that they're suing three Kentucky coal mining operations. The activists claim to have found evidence that the coal companies routinely falsified their discharge reports.

“In one case, we noticed that all 42 of the reported pollutant levels of first quarter of 2009 were exactly the same as the second quarter,” said Donna Lisenby of Appalachian Voices, which conducted the study. In some, the reports were signed and dated in advance of the date of the tests, she said. [Louisville Courier-Journal]