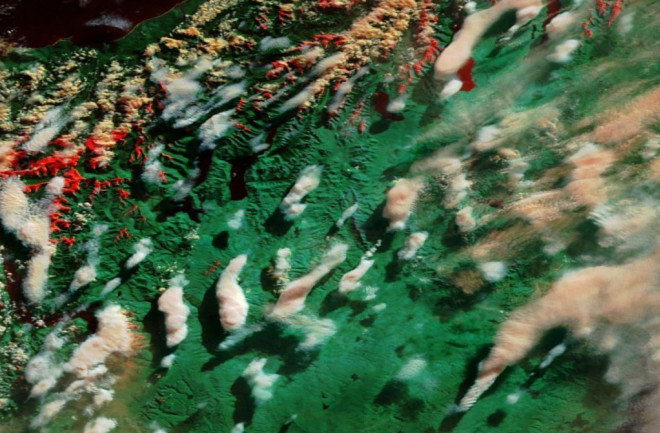 This false color view over New Zealand was captured by NASA's Terra satellite in April. (Image: NASA) This beautiful squadron of clouds formed over New Zealand's South Island on April 27 — and I've been meaning to showcase it ever since. I spotted it using NASA's Worldview web site. The false-color image, captured by NASA's Terra Satellite, emphasizes wavelengths of light that are particularly good at revealing snow and ice, including ice crystals in clouds that register in peach colors. The bright red tones toward the top of the image reveal snowpack in New Zealand's Southern Alps mountain range. I'm no meteorologist, so I could be wrong, but these look to me like lee-wave lenticular clouds. These can form when wind blows across a mountain range, becoming disturbed in such a way as to create standing waves in the atmosphere. Depending on conditions, clouds can form at the top of the wave crests. For a technical explanation (very...), see this paper. Some of the clouds in the image above have materialized downwind of The Remarkables mountain range, which form a dramatic backdrop for Lake Wakatipu on the South Island. The wind seems to be torquing one of the clouds into what appears like a weird corkscrew shape. Look in the lower right quadrant for it.

A screenshot of a timelapse video showing a lenticular cloud over New Zealand's North Island. Click on the image to watch the video. (Video: Primal Earth Images) New Zealand seems to produce its share of spectacular cloud formations. And not just on the South Island. The image above is a screenshot of a timelapse video showing a saucer-like lenticular cloud hovering over the Rangipo Desert on the North Island. Make sure to click on it to watch the mind-blowing video. And definitely check out Primal Earth Images for more. After looking at their amazing stuff, I am really tempted to drop everything and just move to New Zealand.