Antarctica's eastern ice sheet is not well understood but may be less stable than once thought according to new research. 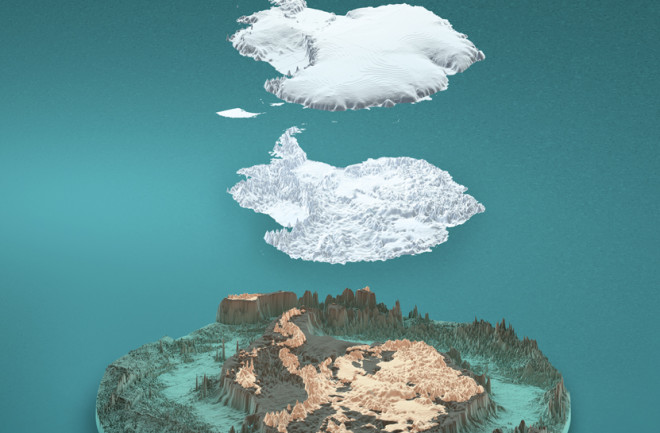 Along Antarctica’s west coast near the Amundsen Sea, great white glaciers the size of U.S. states slowly slide into the ocean. In the early ’80s, scientists dubbed it the continent’s “weak underbelly” after learning that ice here — which helps hold back the entire West Antarctic Ice Sheet — is anchored below sea level.

If oceans warmed, this unfortunate topography could cause rapid and irreversible retreat. In decades past, glaciologists had assumed these ancient features advanced and retreated on epic time scales — not in human lifetimes.

Ever since, climatologists have been spellbound watching the rapid changes. We now know that melting the whole West Antarctic Ice Sheet could cause 15 feet of global sea level rise. And that’s galvanized the scientific community, leading to a new $50 million joint U.S.-U.K. project to predict ice melt rates.

Meanwhile, Antarctica’s other glaciers have drawn far less attention, even though if East Antarctica melted, it would raise global sea levels by a whopping 174 feet. Thankfully, its glaciers sit largely above sea level, where they should be safe for hundreds or thousands of years — at least that’s been the traditional thinking. But a startling string of new evidence, gathered from field expeditions, as well as air- and space-based observations, has scientists questioning their assumptions.

“East Antarctica is the sleeping giant,” says Amelia Shevenell of the University of South Florida, who’s studied the continent up close eight times since 1995. “We don’t really understand it.”

Melting just one nearly France-sized glacier in East Antarctica, called Totten, would unleash almost as much sea level rise as melting the entire West Antarctic Ice Sheet. Satellite data already show Totten Glacier is melting faster than any other in East Antarctica. And a recent study hinted at why: Far more of the glacier floats on warming ocean water than scientists thought.

To find out more, Shevenell and a large interdisciplinary team sailed as close as they could to the glacier’s mouth — a coastline where sea ice freezes against grounded icebergs. The captain had to turn around their vessel after nearly freezing into the ice. But they still managed to deploy a suite of scientific instruments to probe the region’s past.

One goal was to study sediment layers below the seafloor. By bouncing seismic signals off the sea bed beneath their ship, the team gained a sort of “X-ray view.”

They saw the bottom layers, which date back more than 34 million years — to a hotter Earth, before continental-scale ice sheets covered the region. Then, higher up in the sediment, pebbles marked the arrival of debris-toting icebergs. These kinds of sediment changes revealed glaciers retreating and advancing on 11 separate occasions.

Their results hint at ice melt when Earth’s temperatures and carbon dioxide levels resembled predictions for the not-too-distant future.

And the group spotted something else, too: Massive channels scar the seafloor. Sean Gulick of the University of Texas, Shevenell’s colleague, recalled seeing similar features off the coast of Alaska. These channels form when warm air melts surface ice and creates rivers of runoff that tunnel through the ice and carve the underlying rock en route to the ocean. That requires temperatures above freezing, a relative rarity across much of the southern continent.

“That was completely unexpected,” Shevenell says.

Their finding comes as scientists notice more surface melt across Antarctica: Last year, two Nature studies showed it’s more common than suspected. By sifting through decades of aerial and satellite photos, a team from Columbia University’s Lamont-Doherty Earth Observatory discovered some 700 drainage systems across the continent. They range from streams and ponds to 400-foot-wide waterfalls.

Shevenell suspects Totten got a one-two punch — warm ocean water lapped at its underside as hot air melted the surface. But she can’t be sure without more data. So her team is working on a project to return to the glacier and drill down into the scarred sediments to more precisely date the glacier’s moves. They’ll better unravel when Totten retreated and advanced, and why it’s so sensitive to climate change. But the project won’t be easy. The logistics of working in this environment could require drilling technologies not yet invented.

For their team, the risk and expense are well worth it to uncover secrets from an overlooked part of the continent. “I think it is a complete oversight, and we’ve been saying this for years,” Shevenell says. Now that’s finally starting to change.

This article originally appeared in print as "The Sleeping Giant."