Consistently hotter temperatures could affect the feeding of great apes. 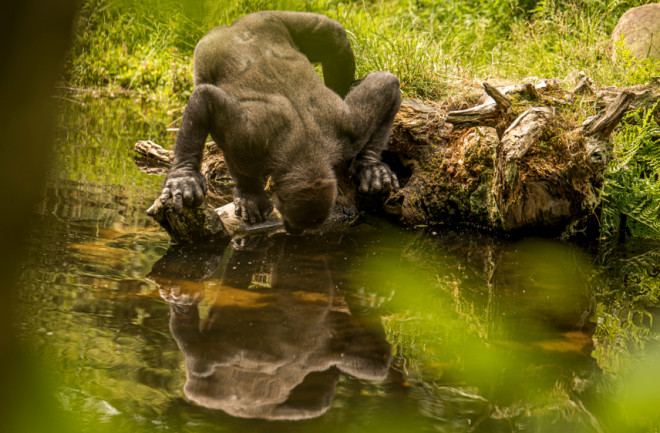 Martha Robbins has been working with mountain gorillas in Uganda so long that having a large, 300-pound male charge towards her is a relatively normal occurrence. The primatologist with the Max Planck Institute for Evolutionary Anthropology in Leipzig, Germany has made a career of getting the great apes habituated to her presence so she can study them up close. Sometimes habituation can take a while, and that means a large primate occasionally comes barreling through the forest towards her.

“That’s when you have to say, ‘I know this is crazy, but I’m holding my ground,’” Robbins says.

It’s nearly always a bluff charge; Robbins says she’s never experienced any violence from the animals. If you show them respect, she says, then they will let you into their lives. “They have a nickname, Gentle Giants.”

During her decades working with groups of mountain gorillas in Bwindi Impenetrable National Park in Uganda, one of the things her team has tracked involves the frequency with which the primates drink water.

The job used to be pretty easy — they aren’t usually the thirsty types. The great apes derive nearly all the water they need from the plants and fruit they spend hours munching on every day in the tropical rainforests of Uganda, Rwanda and the Democratic Republic of Congo. But warmer weather due to climate change has led to increased drinking behavior by the primates, according to a study published recently in Frontiers in Conservation Science by Robbins and her colleagues.

Life in the Jungle

“They are still wild animals, but they are habituated to humans,” Robbins says. Once they reach this point, they will act neutrally around humans. Habituation involves patience similar to that of famed primatologist Dian Fossey, who was murdered in Rwanda during her research on gorillas in the Virunga Mountains.

Robbins has gotten to the point now where she has habituated five groups of gorillas to her presence in Bwindi, each ranging in size from five to 15 individuals. She knows nearly everything about these individuals, including who hates who. “It’s a soap opera personal life of families of gorillas,” she says.

She also knows which individuals should be given more space. “It’s kind of like people — you know who you can joke with and you know who you can’t,” Robbins says. “Even though I’ve been doing it my whole adult life practically, it’s a real privilege that the gorillas let me into their lives.”

As part of her studies, Robbins has recorded how often the gorillas drink water. She says the gorillas derive 90 percent of the water they need from their vegetarian diet. Some 15 percent of this consists of fruit while the rest is leaves and plant stems. The gorillas typically spend about five to six hours eating per day — vegetarians of this size need a lot of food to sustain themselves.

“Imagine weighing 150 kilos and surviving off of eating broccoli and spinach. If that wasn’t cooked, you’d be eating a lot of it,” Robbins says.

For this study, data was collected by Robbins’ team on five groups of gorillas in Bwindi between 2010 and 2019. They also examined data collected by the Dian Fossey Gorilla Fund’s Karisoke Research Center in Volcanoes National Park in Rwanda from January 2012 to December 2020.

They found that while gorillas don’t usually drink much, they do sip water from puddles, swamps and occasionally streams in warmer temperatures. As the climate changed over the decade of research, the gorillas tended to drink more water, changing their behavior to cope with the increasing temperature.

Robbins worries this need for water could disrupt their natural feeding patterns. Gorillas often spend much of their day eating leaves and fruit in areas that lack nearby water supplies. If there is no water around, they may have to go out of their way to find it — to the detriment of being around the best food supplies.

Gorillas are well-insulated to deal with the cold nighttime temperatures at the mountain elevations that sometimes reach near freezing. When it gets super hot, the primates retreat deep into bushes away from the sun where it’s a little cooler — what Robbins calls “enforced resting.”

If temperatures get consistently hotter due to climate change, the combination of having to find standing water and having to hide in deep vegetation to rest could take away from foraging. This in turn could have a negative effect on the amount of energy they have, which has implications for the population of the great apes.

The number of mountain gorillas has been increasing in recent decades, but the total population still only sits at around 1,000 — the species is still listed as endangered by the International Union for Conservation of Nature. Conservation challenges like habitat loss remain, and Robbins worries that climate change will also have an increasingly negative effect on gorillas.

“[Climate change] literally is going to impact every species on this planet, in some cases in ways in which we wouldn’t imagine,” Robbins says. “We can’t ever be complacent.”