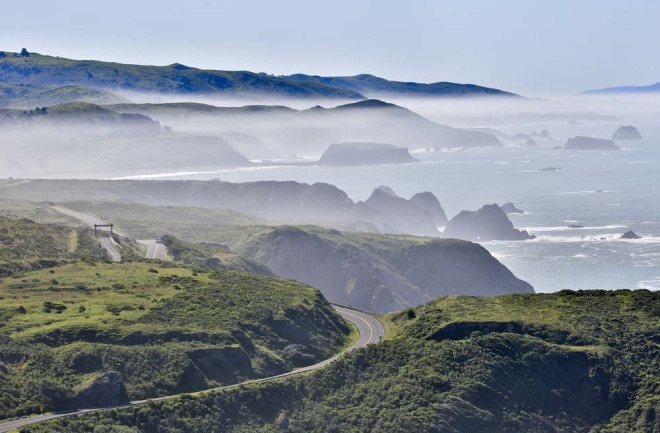 Just north of San Francisco, Bodega Bay cuts a crescent moon shoreline into the California coast. Toward the end of summer in 2014, the water temperature of the bay skyrocketed. In one of the most intense marine heatwaves on record, warm water persisted for nearly seven months. Now researchers say that the marine heatwaves that roasted Northern California’s coastline for two years also moved a record amount of marine life north. And these marine animal relocations forecast what California’s coast may look like in the future, the researchers say.

“Against the backdrop of climate change, we hope southern species will track northward because that’s necessary for their persistence and survival,” Eric Sanford, a marine ecologist at the University of California in Davis, who led the new research, said in a statement. “It’s perhaps a glimpse of what Northern California’s coast might look like in the future as ocean temperatures continue to warm.”

Between 2014 and 2016, some 14 marine heatwaves hit the California coast between Bodega Bay and Point Arena, a nib of land less than 100 miles north. During the heatwaves, sea surface temperatures ballooned by between 3.6 degrees Fahrenheit and 7 degrees F warmer than usual. The heatwaves lasted for anywhere from five to nearly 200 days at a stretch. A strong El Niño event in 2015 made the warming situation even worse. And since past El Niño events have been known to move marine life around, Sanford and his team wondered if the heatwaves were also pushing sea life north.

The researchers visited beaches, state parks, and marine reserves up and down the coast for nearly 3 years recording and collecting sea-life that washed up on shore and along the rocky intertidal zones.

The extensive survey revealed crabs, snails, algae, and barnacles had shifted northward. Some species — like the red sea cucumber — moved a few miles north. But others made bigger moves. The common bottlenose dolphin was spotted 80 miles north of its typical range and the Pacific snake eel relocated nearly 250 miles.

Although the team’s research focused on the marine heatwaves, the shifts in marine life extend beyond these extreme events and may indicate further change to Northern California’s seascape.

“Before our very eyes, we’re seeing the species composition shift to more warm-water southern animals in just the 14 years I have been at the Bodega Marine Laboratory,” Sanford said. “That’s a barometer of change for these ecosystems.”