Climate Change and the Floods 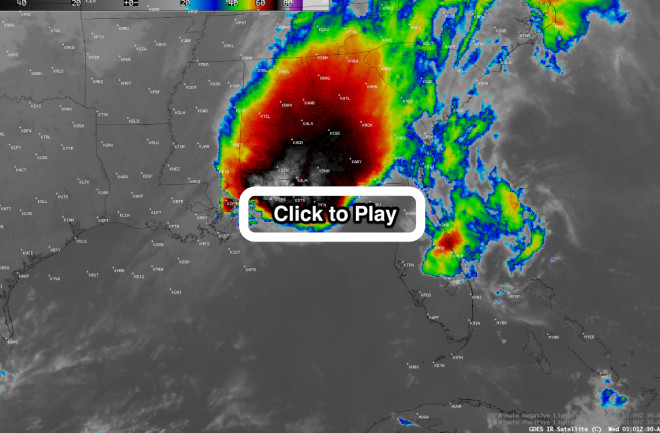 An infrared image from the GOES-13 weather satellite shows a massive system of thunderstorms over the Gulf Coast of Alabama and Florida on April 29. Click for an animation showing the evolution of the storm. Be patient — it's a huge animated gif and the loading time may be slow. (Source: Cooperative Institute for Meteorological Satellite Studies.) Much has been made in the past couple of days about the possible role of climate change in the extreme rainfall and subsequent flooding in Alabama and Florida. Here, for example, is a particularly overwrought headline from Future Tense, hosted by Slate:

There certainly was a calamity. As Jeff Masters of Wundergroud.com reports:

Torrential rains on Tuesday night in Pensacola, Florida brought an all-time calendar-day record of 15.55” of rain to the city. The old calendar day record of 15.29" in October 1934 was due to a tropical storm that made landfall just to the west of the city.

But claiming that a "calamitous climate" was "responsible" for this disaster goes well beyond what climate science can actually say at this point.

To be fair, the author of the piece, Eric Holthaus, actually says something more conservative:

It probably wouldn't be correct to say that climate change caused Pensacola’s floods, but it surely made them more likely. Climate change is playing a role in extreme rainfall events like the one on Tuesday.

Well, I am sorry to say that even this more conservative statement misses the mark.

Yes, it is true. The atmosphere is warmer, so it holds more water vapor. And that means there's more water available to fall to land in storms and thereby cause flooding.

In fact, as Kevin Trenberth of the National Center for Atmospheric Research has said, the effect of increased greenhouse gases in the atmosphere is now part of the climate system's background state. So it plays some role in every event.

But the important questions are what role specifically, and just how much? For this event, we don't know yet. Period. It's possible that climate change had a significant impact, through a variety of mechanisms. But it's also possible that in this particular event, the impact was relatively modest.

Scientists won't have an answer unless and until they do a formal "attribution" study. This is a painstaking process that has in the past taken months or more for a single event. The process "involves big demands on computing power, sophisticated statistical methods, and a crystal-clear definition of ‘extreme’ for the event at hand," according to the National Center for Atmospheric Research.

Myles Allen, a pioneer of attribution research, has in the past criticized none other than Al Gore for saying something similar to the Future Tense headline above — that there is proof that climate change is directly causing extreme storms and droughts. When Gore said that back in 2011, "my heart sank," Allen wrote in a column in The Guardian. That's because "human influence on climate is making some events more likely, and some less likely, and it is a challenging scientific question to work out which are which."

By itself, the fact that the atmosphere carries more water vapor now than before — a point that Holthaus and other journalists emphasized in their coverage — doesn't really tell us everything we need to know to assess what happened here. Why?

Consider this: Research shows that the most intense precipitation events are likely to produce between five and ten percent more rain than in the past. That's because for every 1 degree F rise in temperature the atmosphere holds about 4 percent more water vapor. Now let's put that in context. Total precipitable water over Pensacola during the storms (meaning the amount of water vapor in the atmosphere available to fall as rain) was more than

Clearly, more water vapor in the atmosphere from climate change wasn't responsible for all of that.

Even so, attribution research has shown that some extreme weather events were made more likely by climate change. For example, such research showed that climate change significantly raised the risk of damaging flooding that occurred in England and Wales in 2000. The scientists ran thousands of climate model simulations of the weather, some without the estimated influence of climate-altering greenhouse gases, and others with that influence added in.

In a paper in the journal Nature, here's what the researchers concluded:

The precise magnitude of the anthropogenic contribution remains uncertain, but in nine out of ten cases our model results indicate that twentieth-century anthropogenic greenhouse gas emissions increased the risk of floods occurring in England and Wales in autumn 2000 by more than 20%, and in two out of three cases by more than 90%.

But just because human-caused changes to the climate system increased the risks substantially in that case, does not automatically mean that they did so in the South this week — let alone that "the calamitous climate" was "responsible" for what happened there.

I honestly don't know why publications and journalists are so eager to make connections like this in the aftermath of every extreme weather event. If you have to say anything, it should be enough to point out, as the latest IPCC report did, that there "are likely more land regions where the number of heavy precipitation events has increased than where it has decreased." And that the "frequency or intensity of heavy precipitation events has likely increased in North America and Europe."

To that, maybe you can add that the long-term risk appears to be rising because of increased water vapor in the atmosphere, as long as you quantify how much of an effect that is estimated to have had already. It would certainly be legitimate also to provide readers with estimates of how much the risks might rise in the future if greenhouse gas emissions continue unabated.

And if your audience would be interested to know what's going on at the cutting edge of science, by all means, go ahead and discuss the role that climate change may be having on meteorological blocking patterns like the one that was in place earlier this week. Andrew Freedman did just that at Mashable — responsibly, in my opinion, because he emphasized scientists are divided on this particular question and therefore there's no definitive answer just yet.

But for goodness sakes, while alliterative and dramatic headlines like Future Tense's may get you thousands of page views, in the long run they do a disservice to climate change communication.