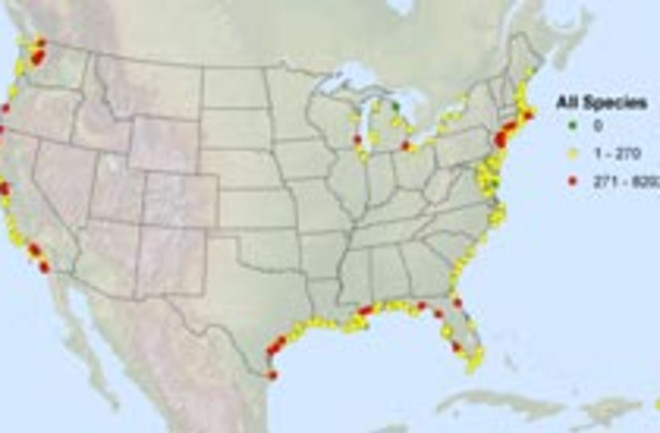 Chemicals that prevent your house, sofa, and clothes from bursting into flames are ending up in coastal waters all around the United States, and could be damaging the health of both sea creatures and the humans who consume those animals, according to a new study from the National Oceanic and Atmospheric Administration (NOAA). Says the NOAA's John Dunnigan:

"This is a wake-up call for Americans concerned about the health of our coastal waters and their personal health.... Scientific evidence strongly documents that these contaminants impact the food web and action is needed to reduce the threats posed to aquatic resources and human health" [The Oregonian].

Polybrominated Diphenyl Ethers (PBDEs) are a class of flame retardant chemicals that have been widely used in consumer products since the 1970s.

The chemicals are credited with saving hundreds of lives each year from the spread of fire, federal scientists said.... But studies on animals have shown that flame retardants can cause thyroid hormone disruption and interfere with developing reproductive and nervous systems [Los Angeles Times].

The NOAA study used data from its Mussel Watch Program, which has been monitoring pollution along the coast for 24 years. Researchers found the highest levels of PBDEs around populated coastal areas, like the New York City region and Southern California, but they were also found in remote regions, like the waters around Alaska.

The chemicals enter the environment through runoff, improper disposal of household and electronic waste, and through sewage sludge. The chemicals also appear to be airborne [Los Angeles Times].

PBDE production has been banned in a number of European and Asian countries. In the U.S., production of most PBDE mixtures has been voluntarily discontinued [South Florida Business Journal],

and a few states, including Maine and Washington, have banned their use. Nonetheless, the chemicals were present in mussels collected along the Maine coast. While the extent of the chemicals' spread is alarming, scientists stress that they aren't yet sure

what effects, if any, the chemicals might be having on humans, or how much exposure could cause health problems. "I certainly wouldn't, on the basis of this data, get alarmed about people eating mussels or eating shellfish. The stuff is all over our houses and in all the other foods you eat," said Deborah Rice, a Maine state toxicologist who has studied the health effects of PBDEs [Portland Press Herald].