Can We Predict When People Will Abandon the Jersey Shore? 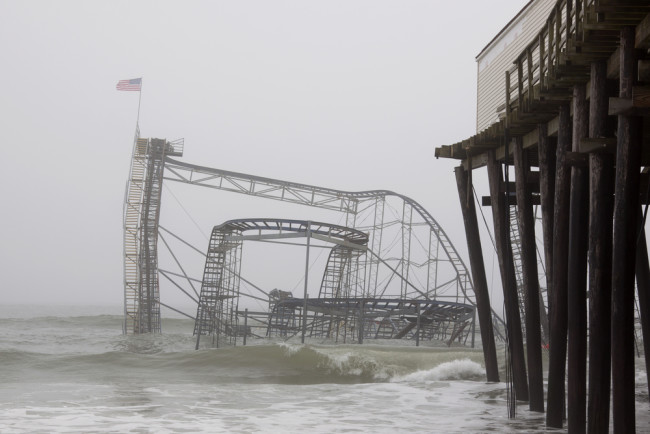 The Casino Pier Star Jet roller coaster submerged in the sea on January 13, 2013 in Seaside Heights, NJ. Courtesy Glynnis Jones / Shutterstock Diamond City, North Carolina, is not actually a city, in that no one actually lives there. People did live there, though, back in 1899. That was when a major hurricane hit the community, on a small barrier island near Cape Hatteras. Homes were destroyed, animals were killed, and graves were uncovered or washed away in the storm according to a conservation group in the area. By 1902, all 500 residents in Diamond City had picked up and left.

Left, Rasmus Midgett sits on the wreckage of the Priscilla after the San Ciriaco Hurricane. Right, another ship driven ashore in the storm. Images courtesy State Archives of North Carolina. The people there didn’t have computer climate models, or rapidly rising seas, or any understanding of increasing storm vulnerability; they just had a desire not to deal with what they assumed would be a constant problem. That problem, of course, is one that anyone living on the East Coast is confronting, especially with the waters of Hurricane Sandy still slowly receding from our coastal consciousness. The question is, when should people in New Jersey, Long Island, Maryland, and elsewhere start thinking about leaving behind their own versions of Diamond City?

Straw that breaks the camel's back

Dylan McNamara, a complex systems researcher at the University of North Carolina at Wilmington, is trying to answer that question. He and colleague Andrew Keeler, of East Carolina University, have created a coupled model combining physical properties of the coast—beach erosion rates, varying degrees of sea level rise, storm vulnerability, and other factors—and economic and human factors involving risk perception and government subsidies. The model—published in the journal Nature Climate Change—can be used to examine, basically, when people will begin to abandon those houses at which Sandy huffed and puffed. McNamara says that locales are particularly vulnerable to desertion if the economics aren’t good to begin with. “Right before [a major] storm the financial returns on their investment are just barely overwhelming the costs of being there, but then the storm comes,” McNamara says. “That’s the straw that breaks the camel’s back.” Presently the model paints a general picture, but the researchers are working on adapting it for use in specific communities, essentially predicting when certain coastal property has negative value and the residents simply get up and leave. In general, though? Sea level rise of 10 mm per year could send some of America’s coastal residents running inside of 50 years from now.

Do you believe in sea level rise?

McNamara’s model incorporates a range of “actors”—imaginary people who buy and sell coastal property. These actors can be what he calls “observationalists,” meaning people who rely largely on what has happened in the past to inform their decisions; or they can be “model believers,” those who listen to what science is saying about impending sea level rise and increasingly damaging storms. 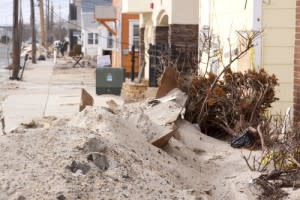 Debris left from Sandy in Seaside Heights, NJ. Courtesy Glynnis Jones / Shutterstock Not surprisingly, if the coast has only observationalists, the time to abandonment is substantially longer. Model believers, in contrast, abandon their properties more quickly, and as a result they suffer less property damage overall. This creates an unfortunate “equity issue,” in that both disaster relief and beach nourishment are subsidized heavily by the federal government (meaning, taxpayers). In other words, the few are capitalizing on the generosity of the many. “[Taxpayers] are subsidizing people who may think very differently about the environment,” McNamara says. “And more importantly, the amount that they’re subsidizing is strongly tied to that belief.” Less belief in climate change means longer time to abandonment, which means more damage over time and more money flowing from taxpayer to the stubborn coastal resident. The modeling on that divergence is striking: with low sea level rise of 3 mm per year, the two types of property owners suffer similar amounts of damage. But if sea level rise reaches 12 mm per year, “observationalists” begin to suffer an average property damage of over $100,000 per year while the model believers’ damage actually drops toward $30,000 per year or so. Why? They know when to leave. But an important part of the model is that it isn’t just belief in climate change and sea level rise that drives coastal property decisions. The federal government is the 800-pound gorilla in the room.

“There seems to be this universal agreement amongst a lot of people that the way we’re doing things at the coast right now is dumb,” says Robert Young, a professor at Western Carolina University who studies coastal processes and management. “At the moment, I don’t see any need for most of these folks to think about climate change, because the federal government isn’t thinking about climate change.” Young points out that the Sandy relief funding approved by Congress not only included money to help rebuild infrastructure and give aid to families who lost homes, but also had $3.4 billion slated for the Army Corps of Engineers to work on protecting against future storms, an odd add-on for an emergency response package. For the better part of a century coastal communities have relied on beach nourishment—sand brought in to raise dunes and widen beaches to protect homes from erosion and storms—which is often subsidized to the tune of 65 percent or so. 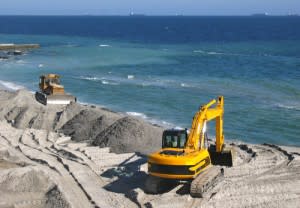 Courtesy Glynnis Jones / Shutterstock Young cited the case of Dauphin Island, Alabama, which he says has received a federal disaster declaration at least eight times in a quarter of a century. “This is a place that you would think would have been abandoned,” he says. “It’s barely a sandbar. And yet we continue to rebuild the roads on that place with federal funds, every time there’s a storm.” Federal dollars vs. rising seas Those federal subsidies are key to the model’s predictions. In a scenario involving sea level rising at about 3 mm per year, removing the subsidies changed the time to abandonment by as much as 250 years. Interestingly, as sea level rises faster, the subsidies play less of a role; if confronted with nature’s encroachment on a massive scale, we care a bit less that someone else is paying to raise a dune. So the question of when we will start to abandon Ocean City, Maryland, and the southern edge of Long Island, and particularly vulnerable parts of the Jersey Shore, relies heavily on what the government does. If the storms keep coming—they will—and the seas rise faster and faster—they will—then it’s likely that Diamond City’s fate won’t look so strange anymore. And once we're gone, we would probably stay gone: no one has ever tried to move back to Diamond City.

Dave Levitan is a freelance science journalist based in Philadelphia. He writes about energy, the environment, and occasionally zombies. Find more of his work here, and follow him on Twitter @davelevitan.