Colombian citizen scientists built dirt-cheap air quality monitors and deployed them across their city, forcing the government to confront its pollution. Now they’re teaching others to build them, too. 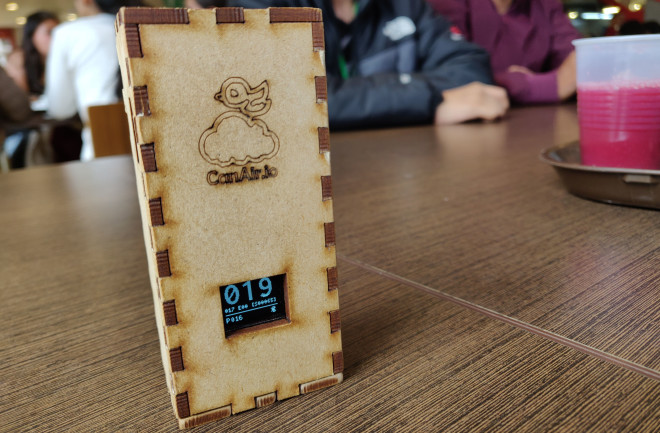 A few years ago, Alvaro Antonio Vanegas, a software engineer and avid cyclist, got tired of the air pollution problems in his hometown of Bogota, Colombia. He decided to join forces with an activist already researching the problem, Daniel Bernal, who he’d heard was building his own rudimentary air quality sensors and using them to track pollution at a local level.

They named their project CanAirIO, from the Spanish word for canary — the proverbial bird in the coal mine that tells you if the air is safe.

And their device is already helping democratize air pollution monitoring. It lets users record GPS locations and particulate matter levels, which measure the liquid droplets and extremely small particles found in air. The size and number of these particles has been directly linked to health problems.

Most cities track these using just a few official and expensive air quality monitoring stations that measure extremely accurate pollution levels at a select group of sites. The monitors can cost anywhere from $30,000 to as much as $100,000. Even some smaller, commercially-available sensors can cost thousands of dollars.

CanAirIO’s device takes a few hours to build and costs between $50 and $100. For years, they’ve been teaching citizen scientists, including local students, how to build and deploy the devices.

Take Part: Learn to Build Your Own Air Pollution Sensor via SciStarter.org.

Meanwhile, the CanAirIO team has methodically traveled all over Bogota recording air quality and posting the information online for residents to see. They pedaled their bikes down busy streets. They walked around bus stations. And they rode public buses along their routes. Eventually, CanAirIO even installed fixed sensors outside people’s homes and at other stationary sites around the city.

CanAirIO's team has worked with citizen scientists and students throughout their community, training them to build and use air pollution monitors. (Credit: CanAirIO)

‘The Smell of Diesel Smoke’

The data helped the public build a case to the government for what they already suspected was the culprit. Bogota has one of the most robust bus systems in the world, moving some 2.4 million people every day. And yet, despite such widespread use of public transportation, it’s still one of the most polluted cities in Latin America.

Residents blame the buses themselves, some of which have been in service for decades.

“The buses emit huge clouds of smoke due to lack of maintenance and using the buses beyond their useful life of 10 years,” Bernal says. “When you go on a bus, you detect the smell of diesel smoke. It’s terrible.”

The situation is so bad that on a “No Car Day” earlier this year, the city had to issue an air quality alert even as millions of residents walked, rode bikes and traveled via public transportation.

Ultimately, CanAirIO’s air quality recordings showed what more expensive, traditional sensors did not. It caught local-level measurements of the air residents were actually breathing and showed where the air was safe and where it wasn’t.

One of their biggest discoveries was that the air quality while riding city buses could be 10 times worse than what they found in other parts of the city, like while crossing a windy pedestrian bridge.

So, even on days when overall air quality was considered safe, people were still being exposed to high doses of black carbon and other harmful particulates as they went about their lives.

After several years of follow-up citizen science studies, their findings were published in the journal Atmospheric Environment in 2019. The data backed up activists’ claims about the dirty city buses and showed that the few newer, clean energy buses in use were much safer.

As a result of growing pressure from residents, local officials were compelled to start buying new buses. However, there’s still a simmering debate about how fast the current city government is moving toward buses that use cleaner technology.

And while their effort started in Colombia, the team is now looking to bring this citizen science project around the world to help other communities.

Air pollution is the planet’s single largest environmental health problem, according to the World Health Organization (WHO). The combination of outdoor and indoor air pollution kill seven million people every year. And WHO studies show that nine out of 10 humans breathe highly polluted air. That raises people’s risks of dying from a wide range of causes. The worse the air, the higher the risk of lung cancer, heart disease, stroke and respiratory diseases. Scientists even suspect that air pollution may put people at a higher risk of dying from COVID-19.

CanAirIO thinks their citizen science solution can help fight the problem. By giving people the ability to monitor their air quality levels, they can make more informed decisions about whether or not it’s safe to go outside — or even if it's safe inside.

This week, Bernal, Vanegas, and other team members gave a pair of online tutorials, one in English and one in Spanish, walking people through how to build CanAirIO’s air quality sensors. The events were hosted by Cos4Cloud, a European group that aims to bring citizen science into the continent’s open science landscape, and SciStarter, which connects citizen scientists with the thousands of projects accessible through its website.

How to Build You Own Air Quality Sensor

Building the device is relatively straightforward for someone who’s good with their hands, but it’s also probably not for everyone. The sensor requires some soldering to connect the wires to the circuits. However, using the actual device is easy, the project’s leaders say. So, while parents and teachers might need to help children assemble the hardware, CanAirIO’s air quality sensors are already being used in schools by students as young as 12-years-old.

And the device is surprisingly accurate. They tested their device by putting it in the same location as a more traditional, high-priced sensor commonly used for academic research. CanAirIO performed well, coming in close to the more expensive instrument’s results, but without quite the same level of accuracy.

But that’s also not really the point of CanAirIO, the team says. The device is designed to show trends and tendencies, tracking daily life and creating large amounts of useful information that citizens and policy makers can use to make daily decisions. So, it’s not a precision instrument, but it’s still a powerful tool for measuring air quality.

Ultimately, they’d like to make the device even more usable. They’re working on engineering an even smaller air quality monitor that people could even wear as they go about their daily lives, recording data on their commutes and around their workplace.

“I think the most important thing is that you have air quality information in any place — in your home, on your bike, in your car — that is very easy to understand,” Bernal says.