Can New Climate Vows and "All of the Above" Co-Exist?

As you undoubtedly heard, climate change was mentioned prominently by President Obama in his second inaugural speech. Greens are applauding the strong words but based on his record (or lack thereof) on the climate issue (some believe he is unfairly maligned), and his lofty (unfulfilled) 2008 promises, many are taking a wait-and-see approach. Meanwhile, what to make of the President's surprising elevation of climate change into the public discourse? Let's game out a few of the possibilities. Fair warning: What follows is a mixed metaphor palooza.One: He's being a cruel tease, like Lucy when she promises Charlie Brown that she won't yank the football away just as he's about to kick it. Charlie Brown always gives Lucy another chance and she always pulls the football back. I'm not that cynical to believe this is what will happen with Obama's latest vows on climate change. Two: He's going to play small ball. This is a strategy used by smart, heady baseball teams that don't hit a lot of home runs. Despite his grand talk yesterday, Obama is not going to be swinging for the fences. Meaning, no big legislative proposals that reduce carbon emissions via cap & trade or a carbon tax. He realized in his first term that he doesn't have sufficient power for this. But playing small ball can still yield big results. Three: He's pulling a bait and switch. Obama is still going to use his executive authority to implement the kinds of policies that will help reduce carbon emissions. That's the bait. But he's also going to (presumably) approve the Keystone pipeline, to keep the oil & natural gas boom booming. That's the switch. [Note: The shale oil that would be shipped from Canada is still expected to produce a surge of industry-related jobs in the United States.] Now the Keystone pipeline has become somewhat of a line in the sand for the climate movement, so it's unlikely that maneuver will be received well--to say the least. As Joe Romm put it after Obama's speech yesterday:

We will soon see if these [strong climate] words have any meaning whatsoever — since approving the Keystone XL pipeline would utterly vitiate them.

Hmm. President Obama has already made it clear that he's not going to get in the way of the domestic oil & gas boom. I don't think he has any choice on that matter, either, given how important it has been to the U.S. economic recovery. Moreover, the next four years are going to see a continuation of Obama's "all of the above energy" policy, which is already set in motion. This reality will have to somehow be squared with whatever actions the President takes on climate change during his second term. UPDATE: Just caught up with this typically nuanced Revkin take at Dot Earth. UPDATE: The Guardian has a story up on the Keystone pipeline, calling a decision on it "a litmus test of the administration's environmental credentials entirely in Obama's hands." 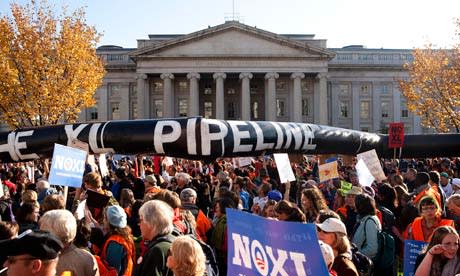 [A 2011 anti-Keystone pipeline protest in front of the White House. Source/Guardian]