After China's last-minute push to clean up for the games, the next three hosts aim to do better. 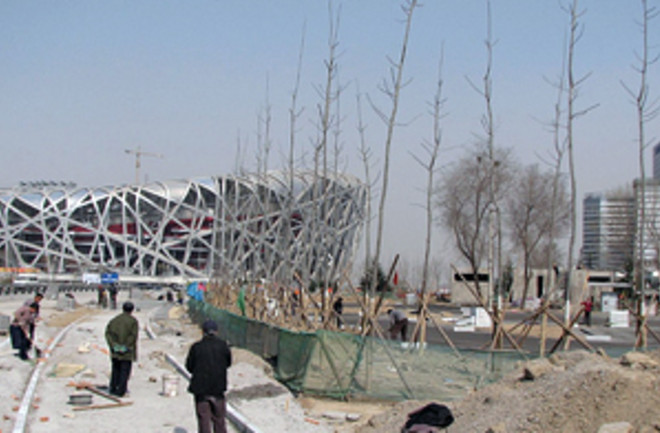 The 2008 Summer Olympics are history, and the Chinese government's attempts to reduce its capital city's infamous smog appear to have been a modest success. With restrictive measures in place like closing factories and limiting drivers to using their cars only every other day, particulate matter in the Beijing skies dropped 20 to 40 percent compared to last summer—but not everyone agrees that the government's actions were the cause.

Though China's clean-up efforts were "extreme but temporary," they reflect the growing concern about greening the games, according to Jonathan Lash, the president of the World Resources Institute. "If you talked about green issues at the Olympics 20 years ago, nobody was paying attention," Lashsaid.

The future Olympic hosts are certainly paying attention. The International Olympic Committee (IOC) has chosen the sites for the next three games, and each one has particular environmental problems to sort out before their Opening Ceremonies.

2010 Winter Olympics: Vancouver and Whistler, British Columbia, Canada The most striking hurdle for our neighbor to the north is distance: Vancouver is nearly 80 miles from its smaller co-host, Whistler, which means fans and athletes could end up doing a lot of driving. Canada's plans to expand the roads between the two cities has ruffled environmentalists' feathers, and the Olympic organizing committee's plan to provide hydrogen-powered transportation hit a snag last year: There just weren't enough hydrogen powered vehicles available yet.

Canada is also going small to try to minimize its environmental footprint for 2010. Where as Norway's stadia for the 1994 Lillehammer games could seat 60,000, Whistler's will accommodate only 12,000. There's no parking, so you'll have to take public transit. And all of Vancouver's Olympic sites, including the organizing committee's own offices, will be built to Leadership in Energy and Environmental Design "gold" standards (LEED).

Even the Olympic torch could get a makeover. Canadian scientists are experimenting with alternative fuels; unfortunately, less-polluting flames don't burn as brightly as the carbon-spewing models in use now. WIRED estimated that the 2008 torch relay caused 11 million pounds of carbon emissions, though much of that came from flying the fire around the world in its own private jet.

2012 Summer Olympics: London Trying to put their own history of pollution behind them, Londoners have pledged to host the greenest games yet. Besides cleaning up canals and rivers, the city has been sprucing up its transit system, including plans to create a high-speed train called the Olympic Javelin linking the Olympic venues in Stratford, East London, with the heart of the city.

The organizing committee responsible for creating the Olympic venues is also working on efficiency: The sustainability plan for the games says the Olympic village will be 44 percent more energy-efficient than buildings constructed with 2006 regulations. Critics had said the previous goal of 25 percent more efficiency lagged behind the government's own standards, which mandated a 25 percent improvement by 2010, so Olympic organizers raised the bar.

London's organizers say they will power the games with at least 20 percent local renewable energy, and pledged to make their games "zero waste," sending no trash to the dump. That means working with corporate sponsors like Coca-Cola and McDonald's to get a recycling plan in gear, because the report says 80 percent of Olympics waste will come from food packaging.

2014 Winter Olympics: Sochi, Russia Only a year and a half has passed since Vladimir Putin skied down the slopes of Sochi in a publicity stunt to help the resort, nicknamed the "Russian Riviera," win the 2014 games. Russian leaders hope the Olympics will help make Sochi a European ski destination.

But at the moment, Sochi is underdeveloped. Jean-Claude Killy, who leads the IOC's Sochi commission, said the Russian resort must build 70 to 80 percent of its venues from scratch. Not only that, but the Black Sea resort is bounded by two nature preserves, and Russia has already had to move the luge and bobsled sites after complaints about their proximity to the Western Caucasus UNESCO World Heritage Site, one of the last wildernesses in Europe still largely untouched by humans.

However, the biggest road block on the path to the Olympics might be political, not environmental. Sochi sits in the Caucasus Mountains, only a 15-minute drive from the Russian border with Georgia, the former Soviet republic where fighting has raged this month.

Will the Games Ever Be Truly Green? Despite all the planning to make future Olympics as green as can be, London planners concede that "some aspects of staging the Games will involve unavoidable emissions"—especially the energy used in construction projects and athletes and fans (and that dang torch) traveling the world. Britain plans to use carbon offsets to make its games carbon neutral.

But the fact remains that a worldwide event like the Olympics can only be so environmentally friendly. "You can't assemble that many people in one place in the world without it being energy intensive," Lash said.

So maybe a truly green Olympiad is a fantasy, but that doesn't mean the games can't leave a green legacy. For instance, Lash said Beijing's Olympic venues are much better and more energy-efficient buildings than they would've been if they hadn't been built for the games. With some careful planning, he said, a "suddenly created city" doesn't have to be a pollution factory or a water glutton. And with the world's attention on green issues, the Olympics could ignite another kind of competition—to build the greenest buildings ever.