Meanwhile, the Colorado Rockies have so far received a bounty of snow. But new research portends a dry future ahead for 40 million people in the western U.S. and Mexico. 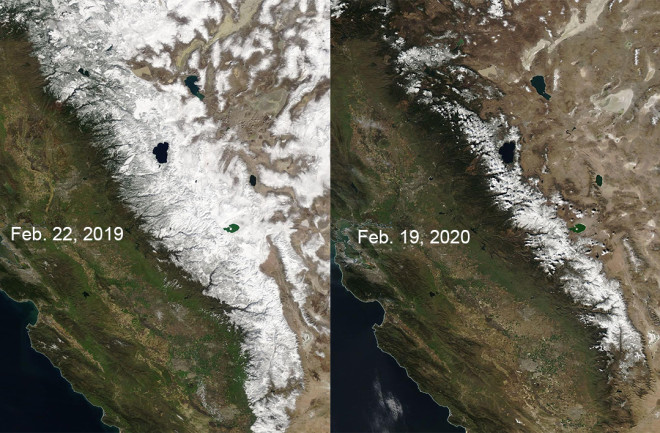 Satellite images taken about a year apart show a dramatic difference in snowpack in California's Sierra Nevada range — source of 30 to 50 percent of the state's water. In late February last year, snowpack stood at nearly 150 percent of normal. Now, it's barely above 50 percent. (Images: NASA Worldview)

What a difference a year makes.

As the comparison of satellite images above shows, last year at this time California's Sierra Nevada range was buried in snow. And even as recently as January of this year, snowpack was looking pretty good.

But since then, the jet stream has ferried storms north of California, causing the snowpack to shrivel — from about 150 percent of average last February down to just a little more than 50 percent now.

A year ago, California's Sierra Nevada snowpack contained much more water than it does now, portending less runoff into reservoirs and a heightened wildfire risk. (Images: National Weather Service)

The images above offer another way of visualizing what's happening in the Sierra. They show the water content of the snow, a factor called "snow-water equivalent," during late February of last year on the left, and the present on the right.

Although the Sierra Nevada covers just a quarter of California, the range provides 60 percent of the state's fresh water, serving 23 million people. The water also is vital to the state's agricultural production, which supplies more than a third of the fruits, vegetables, and nuts consumed in the United States.

Agricultural exports are also a key part of the California — and U.S. — economies. Ag exports from the state total some $20 billion a year, which by one estimate generates nearly 175,000 jobs.

There is one bright spot: Water storage in eight of 12 major California reservoirs is close to or above average for this time of year, thanks to abundant precipitation during last year's wet season. But without replenishment, those reservoirs levels will come down.

Shriveling snowpack doesn't only put water supplies at risk. A dry winter can lead to disasters in summer and fall. "A below-average snowpack in the Sierra at this time of year will often mean a more severe wildfire season is ahead, beginning in the summer," according to AccuWeather Meteorologist Bill Deger.

With about six weeks left to the wet season, things could still turn around. In fact, in 2018 one key measurement on March 1 showed snowpack barely pushing 50 percent of average. But then the mountains were pummeled with snow in what was described as a "miracle March." By April 1 conditions had improved to 93 perent.

Even so, 2018 turned out to be a horrific year for California wildfires. More than 3,000 square miles burned — an area two thirds the size of the Los Angeles metropolitan area — and 24,226 structures were damaged or destroyed. One hundred people lost their lives that year, 75 of them in the Camp Fire, which ranks now as California's deadliest.

Even as concerns mount in California, things are looking better to the east, with some parts of the Colorado Rockies receiving a bounty of snow.

This animation, consisting of images acquired by NASA's Aqua satellite, compares snowpack in the Colorado Rockies in late February of 2018 — a very dry year — with the same time this year. The difference is dramatic. (Images: National Weather Service. Animation: Tom Yulsman)

You can see it in the animation above of images acquired by NASA's Aqua satellite. The field of view stretches from western Utah to the left (the Great Salt Lake is visible at upper left) to Colorado's Front Range and then the Great Plains to the right.

One image in the animation shows conditions in February of 2018, which was particularly dry. Two years later, there's obviously much more snow. Statewide in Colorado, snowpack as of Feb. 22 stood at 111 percent of normal.

Things may look good now, but over the long run, snowpack in the mountains that feed water into the Colorado River is likely to decline significantly, thanks to human-caused warming. A new study shows that if greenhouse gas emissions remain high in the absence of policies to mitigate climate change, the Colorado could lose 31 percent of its flow by mid-century compared to the average for 1913–2017.

If policies were enacted to rein in emissions of planet-warming carbon dioxide and other greenhouse gases, the losses would be limited to 14 percent, according to the study. That's obviously much better than losing nearly a third of the flow.

But it's important to keep this in mind: More water is already being drawn from the Colorado River Basin than is actually flowing within it. So further declines in the water supply, even at the low end, will only make things worse.

Here are the numbers: An estimated 20 million acre-feet are used each year, compared to the Colorado's long-term average flow of about 12 million to 15 million acre-feet of water annually. The result: a steady drawdown of the two giant hydrological savings banks on the Colorado River. The first is Lake Powell, impounded by the Glen Canyon Dam, seen in the satellite image above. It currently stands at just 50 percent of capacity.

Downstream along the Colorado is Lake Mead near Las Vegas, created by Hoover Dam.

The first image in this animation of Landsat satellite imagery shows Lake Mead in 1984, when the reservoir was close to record high water levels. The second image, from 2016, shows shows the impact of nearly two decades of low flows in the Colorado River Basin. (Images: NASA Earth Observatory. Animation: The Water Desk)

You can watch the dramatic impact of demand outstripping supply in the animation of Landsat images above. One image was acquired in 1984, when the reservoir was brimming with water. The other was captured in 2016, after nearly 20 years of low flows in the Colorado.

Today, Lake Mead stands at just 43 percent of capacity. Despite decent snowpack this winter in the mountains upstream, inflow this year is projected to be just 80 percent of average.

With the future promising even drier conditions, much is at risk. The Colorado River Basin supplies water to 40 million people in seven U.S. states and Mexico. It's estimated to support $1.4 trillion in economic activity and 16 million U.S. jobs. That’s one twelfth of the total U.S. domestic product.

From month to month and year to year, snowpack levels from California east through the Rockies will vary, perhaps even more dramatically due to climate change. But despite any short-term upticks, over the long run we are clearly in an era of limits.