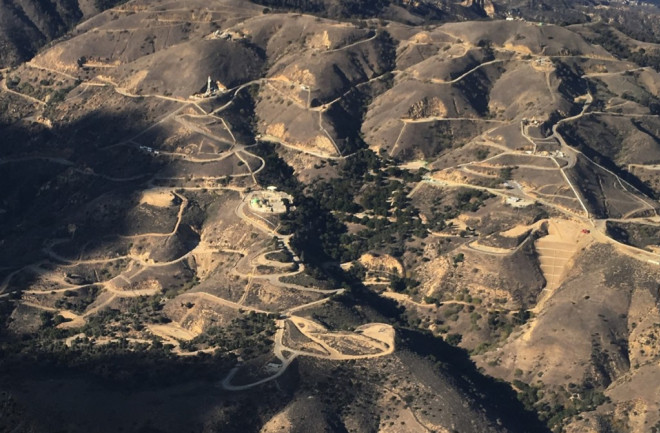 The Aliso Canyon natural gas storage facility shot from UC Davis scientist Stephen Conley's airplane. (Credit: Stephen Conley/UC Davis) When a well tapping into the country’s fourth-largest natural gas storage facility blew out in October, gas started leaking. No one knew how much of the powerful greenhouse gas was flowing out, we could only estimate. The California Energy Commission already had someone under contract who could tell them, and within two weeks, Stephen Conley had stopped monitoring pipelines and was instead strapped into an airplane measuring the plume of gas wafting over the densely populated San Fernando Valley. Conley, a University of California-Davis researcher and president of Scientific Aviation, flew a fixed-wing, single-engine Mooney aircraft, armed with wind sensors and chemical analyzers. He waited until a northerly wind blew the plume over the flat, populated valley. Then, starting at an altitude of 200 feet, he flew back and forth, perpendicular to the wind, climbing slightly in altitude each time, until he rose above the plume.

“This is one of the most well-studied leaks in the U.S.,” says Ryerson. Ryerson, Conley and their research team have released a paper on the sheer scale of the plume, published Thursday in the journal Science. Using data from 13 passes through the plume, they have built a calibration system for when the next leak occurs, which will help quantify the methane output from cities, pipelines and animals. Their findings also put the leak into perspective. The 112-day leak at the Aliso Canyon gas storage facility released more than 97,000 metric tons of methane through the seven attempts to close it. Enough gas was leaking on a daily basis to fill a balloon the size of the Rose Bowl — a stadium that can seat over 92,000 spectators. It temporarily created the largest known human-caused source of methane in the United States, and the Southern California Gas Company paid more than 1,600 households to temporarily relocate during repairs. At its peak, the gas leak effectively doubled the methane emission rate from all sources in the entire Los Angeles Basin. “The Aliso leak all went right into the atmosphere,” says Ryerson. “It was the equivalent of over a half-million cars on the road for a full year.”

Conley flew in a pollution-detecting airplane to compile the first estimates of methane emissions spewing from the Southern California leak. Here, he flies near the gas storage facility on Jan. 8. (Credit: Joe Proudman/UC Davis) The leak was closed on Feb. 11, but they continue to go back. They are now measuring residual leakage from the canyon and the dozens of wells in the area. The data they’ve been able to gather — and that they’re still gathering — will help develop better tools to measure future leaks.

Preparing for the Next Leak

Ryerson said access to this kind of monitoring equipment is incredibly important. A large leak in the North Sea in 2012 was under control two months earlier than expected because they had access to a monitoring aircraft, he said. Planes also helped build a better understanding of what was happening a mile below the ocean’s surface in the Deepwater Horizon leak. Ryerson said he can probably count on one hand the number of aircraft equipped to do this kind of analysis. “They’re often off doing something else,” he said. Conley called this situation a “lucky break” because CEC had already contracted his company. “We still missed the first two weeks,” he said. “That’s one of our take-home lessons. As a nation, we need a process in place where we can have an aircraft on site within hours, not weeks.” Ryerson agreed. “Let’s do the next one better,” he said.