Northern California and the Pacific Northwest are about to get hosed by a veritable gusher of atmospheric moisture, promising a modicum of relief to a region suffering from profound drought. You can see the river of moisture, sometimes called the "Pineapple Express," in the animation above from the Cooperative Institute for Meteorological Satellite Studies. It shows total precipitable water, the amount of water vapor from Earth's surface to the top of the atmosphere, as measured by satellites from Tuesday through today. Parts of California have already been affected, but much more is on the way. Here's another view of what's been heading toward the West Coast — the latest water vapor imagery from the GOES-West weather satellite: 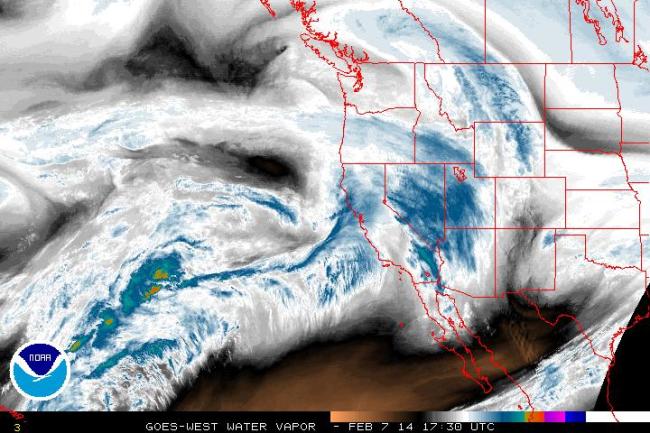 GOES weather satellite image from 2/7/14 showing California getting hosed by a river of water vapor. (Source: NOAA) To my eye, it looks like the region is about to get hosed. And the forecast from the National Weather Service concurs:

The forecast for total precipitation in inches during the next three days. (Source: National Weather Service) Over the next three days, total accumulation of precipitation could reach as high as 10 inches in parts of the Sierra Nevada. This is obviously great news for California, which is currently in the midst of one of the worst droughts in 500 years. But don't believe what you may be reading in some media outlets, such as the Daily Beast, which today ran this headline: "The Pineapple Express to Save NorCal." Embarrassingly shoddy journalism there. Had they done the least bit of actual reporting they would have seen that the lack of precipitation has been so profound that ending it will require a whole lot more moisture than what's coming this weekend: 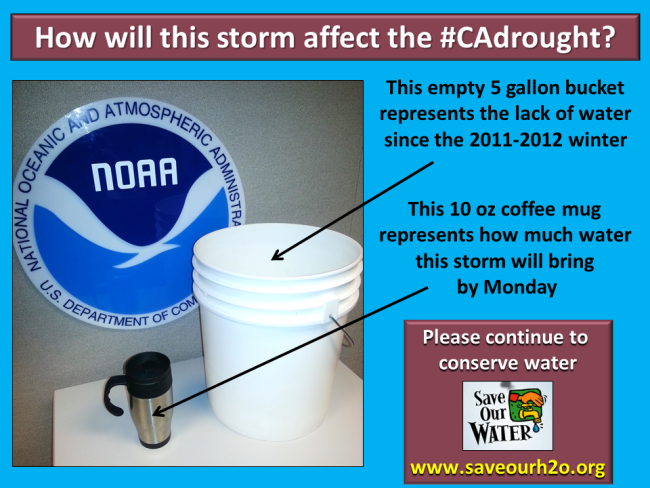 Source: National Weather Service Sacramento According to Jeff Masters, chief meteorologist for Wunderground.com, "the state is in such a deep precipitation hole that it needs at least six more events like this over the next two months to pull them out of drought." Masters also points out that upwards of three feet of snow is predicted to fall in the Sierra Mountains, "though it appears much of the precipitation will fall as rain, reducing the benefit of the moisture during the coming summer months (when Sierra snow melt provides an important source of water)." Let's hope that the gusher keeps flowing and that six more events do materialize over the next couple of months.