California almost out of time for El Niño drought relief

The state has benefited from El Niño this winter, but not nearly enough

An animation of images acquired by NASA's Terra satellite shows the evolution of snowpack in California's Sierra Nevada range in late February for each of the four years since 2013. Color-coded snow-cover data comes from the satellite's MODIS instrument, with red showing the highest percentage of snow cover and blue the lowest. (Imagery: NASA. Animation: Tom Yulsman) | See update below. Synopsis: Since I published this post, forecasts have been firming up and suggesting a shift toward wetter conditions in March. Will it be enough? Please keep reading, and check out the update at the end...

The window is closing on California's opportunity to have El Niño put a significant dent in the state's epic drought — which one study has shown to be the most severe in 1,200 years. Snowpack in California's Sierra Nevada range, a significant source of the state's water, is definitely doing better than it did in 2014 and 2015, as the animation above shows. But with statewide snowpack standing at just 88 percent of normal for this time of year — the heart of the snow season — it really needs to do a whole lot better. (In the southern part of the Sierra, snowpack is at just 78 percent of normal.) The problem is that nearly three quarters of the Sierra's precipitation falls from autumn through February. And, well, just have a look at the calendar... Great hopes were riding on the soon-to-dissipate El Niño, which earlier in the year tied with the event of 1997/1998 as strongest on record. Ordinarily, a strong El Niño tends to rev up the subtropical jet stream, which in turn sweeps storm systems ashore in California during winter. But here's what that subtropical jet looks like for the next five days: 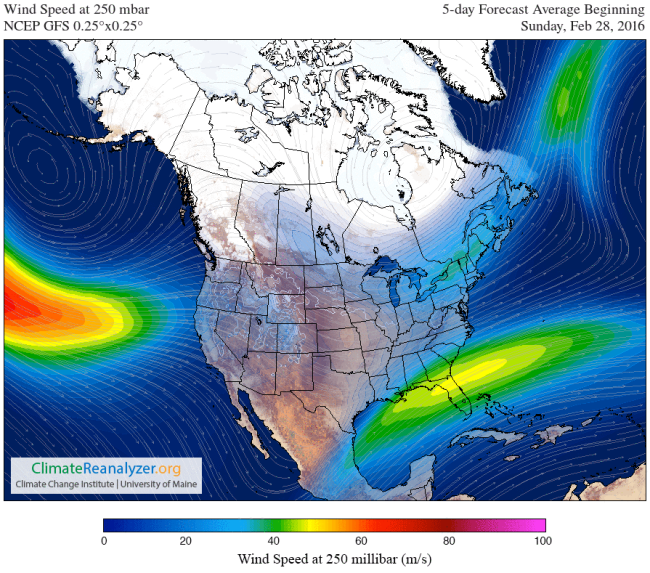 The five-day forecast starting Sunday, Feb. 28, 2016, for the average jet stream wind speed. (Source: Climate Reanalyzer) See that bright tongue entering from the left? That's the jet. And as you can see, the highest wind speeds peter out before they get to California. That has been the pattern as of late. What's going on? One factor is a fairly persistent ridge of high pressure parked over the eastern Pacific and California. Here's what the five-day forecast for that ridge look like: 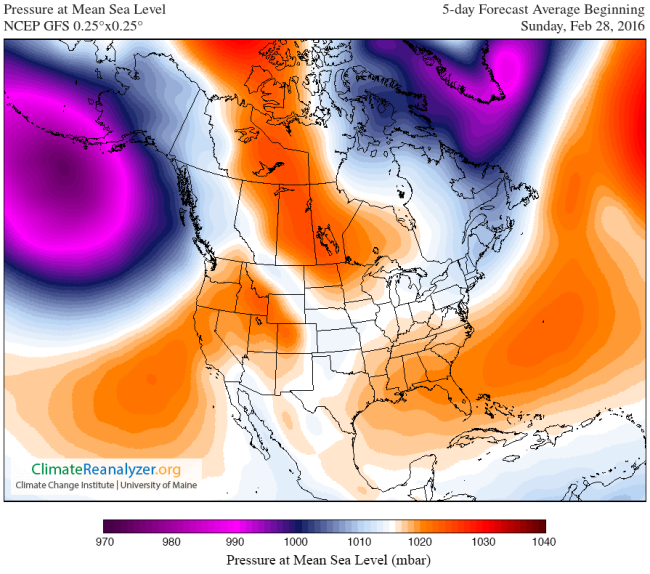 The five-day forecast for atmospheric pressure at mean sea level, starting on Sunday, Feb. 28, 2016. (Source: Climate Reanalyzer) See that orange blobby thing extending from the Pacific into California and neighboring states? That's the ridge. And for the next five days, at least, it will be helping to hold Pacific storm systems at bay. The Climate Prediction Center's one-month outlook shows at best a 40 percent chance for higher than normal precipitation in California. Maybe things will start to change starting next weekend. Weather models are predicting a weakening of the ridge, with maybe a significant storm system coming ashore on Sunday. One thing is for sure, though: If things don't start to change very soon, California is in for another year of serious drought. Just what it did not need. | Update 3/1/16: Since I wrote this post on Sunday, some change seems to be coming. But will it be enough? The forecast for the next six days shows significantly more atmospheric moisture coming ashore from the Pacific in Northern California starting on Friday night than previously expected. This would be ahead of a storm forecast for late Saturday night through Sunday. Weather models are now predicting a classic "pineapple express" scenario, with a firehose of atmospheric moisture stretching from Hawaii and aiming at California. One storm like this would be just a drop in the bucket compared to what's needed for significant drought relief. But the models are also now showing a shift in the overall weather pattern, with the high pressure ridge I wrote about earlier breaking down, and higher odds for an extended period of wetter than average conditions. Here's what the precipitation outlook for March 8th through the 14th looks like:

The sea of green is good news for the West, and California in particular. That darkest green patch over much of California indicates that there is a greater than 60 percent chance of above average precipitation during the period. Even so, the headline I wrote last Sunday for this story still pertains. Despite El Niño, most of the state has received below average precipitation so far during the wet season. And that means drought conditions have barely changed since last year. Moreover, there are only a few more weeks left in California's traditional wet season. Of course, the impacts of this El Niño on California have not gone according to script. So who knows? Maybe precipitation will kick into overdrive during March, and also linger into April and beyond. Let's hope so. (But please — no damaging floods and mudslides!) End of update. |