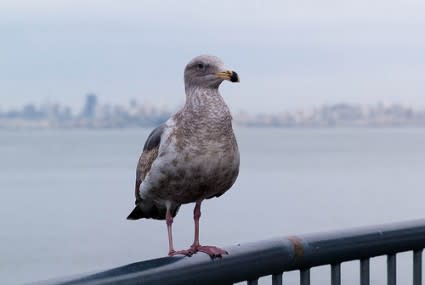 California birds are getting slightly bigger, according to a study published in Global Change Biology in which researchers measured and weighed 33,000 birds over the past 40 years. The increases were small, but significant: in the last 25 years robins have grown 0.2 ounces in mass and 1/8th of an inch in wing length, for example. But the finding runs counter to the only other long-term study measuring avian size in North America, which found that birds in Pennsylvania have shrunk slightly over recent decades. And it seems to disagree with other recent suggestions that animals may shrink in a warming world: Bergmann's rule holds that animals generally get bigger as they get farther away from the equator, because larger animals are better able to retain heat. So what's going on? The researchers have a number of hypotheses, all related to climate change. More severe weather on the West Coast, for example, could perhaps favor bulked-up birds that can store more energy to survive storms. Or maybe warmer temperatures cause changes in rainfall patterns that ultimately lead to more food for birds (a pattern that may be different elsewhere, like on the East Coast). But it doesn't seem clear as yet that the change is related to climate at all; couldn't it stem from some other, unidentified factors, like changes in the birds' habitats due to human settlement? Or greater food availability due to other reasons? The study raises a number of thorny questions scientists will need to examine. Reference: Rae E. Goodman, Gretchen Lebuhn, Nathaniel E. Seavy, Thomas Gardali, Jill D. Bluso-Demers. Avian body size changes and climate change: warming or increasing variability? Global Change Biology, 2011; DOI: 10.1111/j.1365-2486.2011.02538.x