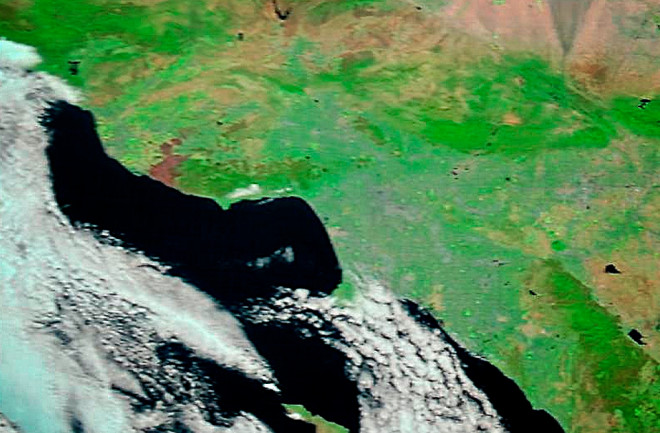 The area burned by the Springs Fire near Los Angeles is seen in the upper left of this false-color image captured May 4 by NASA's Terra satellite. (Image: NASA) Like a patch of skin cancer, the area burned by the Springs Fire near Los Angeles can be seen in this false color image captured today by NASA's Terra satellite. It's the rusty-colored area toward the upper left. FYI: It's not your eyes — Terra's image of the area was a little blurry today. The blaze has consumed 28,000 acres — twice the area of Manhattan Island in New York City. To get another sense for how big it is, compare the burned patch to the size of the developed area of Los Angeles, which is the area to the east etched with a fine grid of roads and highways. Here's a map of the fire perimeter:

A screenshot of a map showing the perimeter of the Springs Fire near Los Angeles. The burned area is in red. Evacuation zones are in blue. (Map: Ventura County Fire Department) Luckily, the weather turned cooler today, and the 1,895 people fighting the blaze in various capacities have made great progress, according to the Ventura County Fire Department. The fire is now 30 percent contained and is not expected to grow significantly.