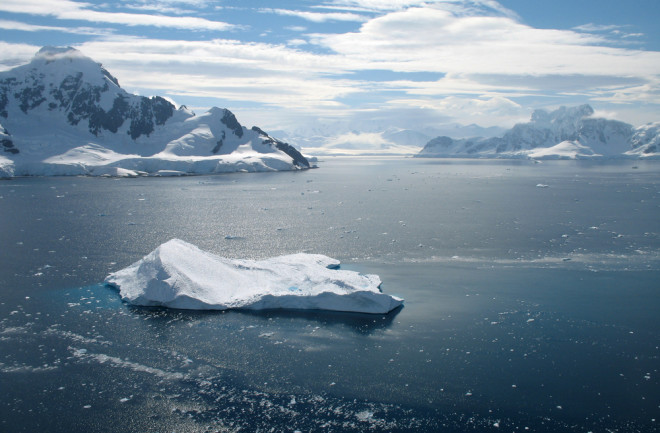 (Credit: H.R.Photos/Shutterstock) In Antarctica, the western peninsula seems to get all of the attention, because that’s where the effects of climate change are most apparent — ice shelves are breaking apart there as you read this. But a team of researchers from Belgium and the Netherlands found compelling evidence to suggest that eastern Antarctica, considered the more stable, is beginning to feel the effects of climate change as well.

Look to the East

The team studied the King Baudouin Ice Shelf in East Antarctica, part of the Norwegian slice of the continent. East Antarctica was thought to be fairly resilient in the face of a warming planet, as that part of the landmass remains much cooler than the western peninsula. By combining satellite measurements with field surveys and models, researchers discovered a massive lake of freshwater underneath the ice shelf, a sure sign that melting has occurred. Once set in motion, the loss of this ice shelf and others could precipitate an increasingly perilous series of events for the ice shelf. The team published its findings Monday in Nature Climate Change.

In Antarctica, the melting ice shelves are only a symptom of a larger problem. They float on the water already, so if they melt, it won’t affect sea levels. However, they hold back massive glaciers on land, and if the ice shelves go, the glaciers will begin sliding toward the sea, causing significant increases in sea levels and endangering coastal cities the world over. It is estimated that Antarctica holds enough ice to raise sea levels by around 200 feet if it all melted. Since 1870, sea levels have only risen a little more than half a foot. In the Antarctic summer, warmer temperatures cause the ice shelves to melt, while warmer ocean currents eat away from beneath. On the surface, torrents of meltwater carve canyons through the solid ice, seeping into fractures in the ice and filling subsurface chambers with water. Over time, the water forces apart the ice shelf, calving off sections as giant icebergs and dispersing its vast mass. This occurred in 2002, when the 1,200-square-mile Larsen B ice shelf in West Antarctica broke apart in just over a month. Warm water had carved the ice shelf to pieces, and its demise was swift. Following its break-up, the glaciers Larsen B held back began accelerating toward the sea, where they too will begin to melt. The continuous outflow of meltwater is another method of ice shelf destruction. This lightens the shelf, and the resultant upsurge can serve to break it from its mooring points on the seabed. This grounding line is an important data point for researchers, because it shows how much of the ice shelf is floating and how much is still anchored to the earth.

Lakes Where No Lake Should Be

In their study, the researchers found liquid water accumulating in a zone near the grounding line on the King Baudouin Ice Shelf. They gathered data by drilling into the ice, but much of the melting was obvious — blue rivers flowed throughout the sheet. In total, they report 55 glacial lakes both above and below the surface. These kinds of lakes were not thought to form in East Antarctica, where conditions should keep the ice shelves cooler than in West Antarctica. The researchers think that a different kind of meteorological phenomenon may be to blame here. The interior surface of Antarctica rises thousands of feet above sea level in the interior; here, air is denser and flows outward toward the shores. Over hundreds of miles, this stream of air strengthens to gale force, creating powerful winds that blow from the center of the continent toward the sea. . These are called katabatic winds, and the researchers believe they are responsible for the warming of East Antarctica. As the winds carry toward the shore, they mix warmer air from the atmosphere with cold surface air, increasing temperatures and contributing to melting. Researchers say the shelf is stable for the moment, but the presence of lakes where there should be ice is a worrying sign. Not only does it herald warming, but it exposes darker ice, which absorbs more heat, to the sunlight, speeding up the melting process. To learn more, check out this website made by the researchers detailing their findings.