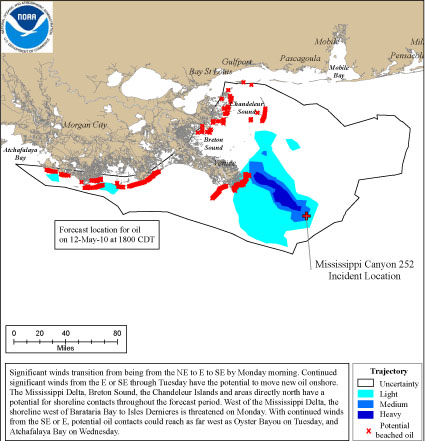 As BP built its 100-ton containment dome and slowly towed it out to the site of the Gulf of Mexico oil spill, company representatives warned that it was no certainty the technique would be able to stem the flow of oil 5,000 feet below the water's surface. Unfortunately, those warnings were correct. On Saturday, ice-like gas hydrates built up on the steel-and-concrete containment box and prevented the box from getting a seal on the leak. The big question is: Now what?

The idea behind the containment dome was that once placed on top of the leaks, it would pump oil up a pipe to a tanker on the surface and keep more oil from getting into the Gulf, BP chief operating officer Doug Suttles says.

The icy buildup on the containment box made it too buoyant and clogged it up, BP's Suttles said. Workers who had carefully lowered the massive box over the leak nearly a mile below the surface had to lift it and move it some 600 feet to the side. If it had worked, authorities had said it would reduce the flow by about 85 percent [MSNBC].

On Sunday, after that failure, Suttles said that BP responders wouldn't give up on the containment box idea. Raising it back up would warm the structure enough to clear off the buildup, but they need a way to stop them from reforming when the box descends again. Pumping the box with methanol or warm water to keep its temperature higher is one option. Suttles says there are a few more alternatives on the table, too:

"One is a smaller dome - we call it the 'top hat', and the second is to try to find a way to tap into the riser, the piece of pipe the oil is flowing through, and take it directly from that pipe up to the ship on the surface." The smaller containment dome would theoretically be less likely to get blocked by hydrates because it would contain less water. It could be ready to deploy on Tuesday or Wednesday [BBC News].

And BP is preparing one other method to stop the leak: garbage. By injecting the leaking area with a so-called "junk shot" made of tires, golf balls, and other debris, Suttles says it's possible to plug up the leak.

"We have some pipe work on the blowout preventer, and if we can open certain valves on that we could inject basically just rubber and other type of material into [it] to plug it up, not much different to the way you might plug up a toilet," he said [BBC News].

Through it all, the oil company is still working on a relief well that would be a much better and more permanent solution than funneling the leak to a tanker on the surface. But that's a three-month process, and despite the fact that it feels like the Deepwater Horizon leak has been pouring oil into the Gulf perpetually, still not three weeks have passed since the explosion that killed 11 and eventually caused the rig to sink.

Thus far fortunate weather patterns have kept the slick mostly out to sea and away from the Gulf Coast, but that luck could be changing. Tar balls—pieces of hardened oil—showed up on Alabama shores over the weekend. Responders can't say for sure yet whether they're from the BP oil spill, but it's a good bet.

Image: NOAA, the 72-hour projection as of May 9