BP Report on Gulf Disaster Spreads the Blame Around 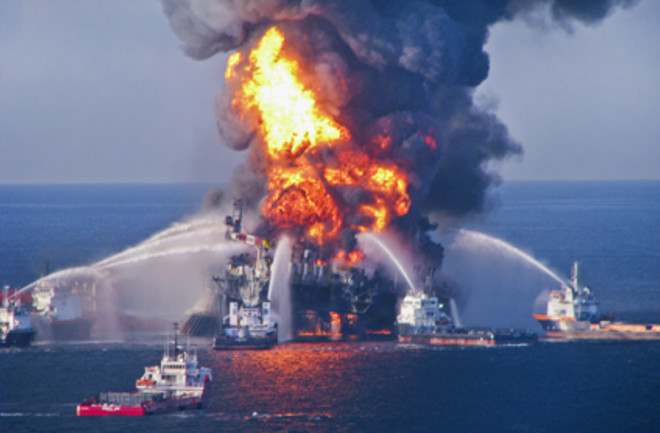 Back in May, when executives from BP, Halliburton, and Transocean were hauled in front of Congress to account for the Gulf of Mexico disaster, it was a merry-go-round of blame. With BP publishing online its own internal investigation into the accident this week, it's more of the same.

BP's report is far from the definitive ruling on the blowout's causes, but it may provide some hint of the company's legal strategy — spreading the blame among itself, rig owner Transocean, and cement contractor Halliburton — as it faces hundreds of lawsuits and possible criminal charges over the spill. Government investigators and congressional panels are looking into the cause as well. [AP]

BP cites eight different places where the accident of April 20 aboard the Deepwater Horizon drilling rig could have been prevented, but points the finger mostly away from itself. One of those problems, it says, was with the workers on the rig.

The BP investigation found human fault, concluding that rig workers should have known from computer data that gas was flowing into the well for at least 40 minutes before the explosion. But crew members testified at the federal hearings that some gas alarm systems had been either bypassed or disarmed on the orders of rig officials. [Los Angeles Times]

As for the well design?

The report absolves BP's widely criticized well design. It says the path that oil and gas followed as they escaped from the well meant that the well's casing and design -- matters that could otherwise implicate BP -- were not factors in the disaster. [Washington Post]

for a full technical explanation of BP's findings, including how nitrogen leaks caused faulty seals and how high pressure overpowered the rig's diverters. The company lists the eight problem items in its executive summary

(pdf). Again, though, this report is as much a preparation for BP's ongoing legal defense as a full accounting of what went wrong. To that end, Transocean and Halliburton already have responded to BP's report with their own legal jockeying, arguing that the BP well design was the real problem, not Transocean's rig or Halliburton's cementing job. Furthermore, BP's internal investigators relied on drilling experts from Alaska, not the Gulf, saying they wanted to avoid a conflict. They also did not have the failed blowout preventer itself, which the Washington Post reports

was hauled up to the surface last week and is in the hands of the federal investigators looking into the accident. Previous posts on the BP oil spill: 80beats: Scientists Find 22-Mile-Long Oily Plume Drifting in the Gulf of Mexico