Blowin' in the Wind: More and More Sickening Dust 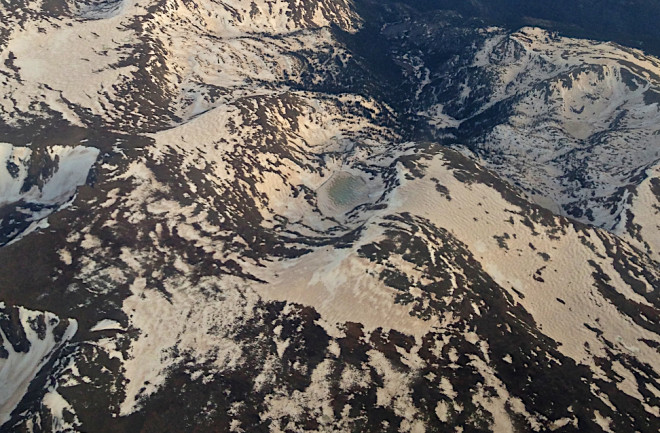 Snow on the high peaks of Colorado's Front Range show discoloration from deposition of dust . iPhone photograph shot from the window of an airplane. (Photo: © Tom Yulsman) At the end of a long journey back from Cambodia last week, I had my face glued to the window as the plane passed low over Colorado's Front Range on its way to a landing in Denver. The scenery is always spectacular, but I was also looking for something specific, and I found it: dust on snow. A lot of it. Check out the picture above and you'll see it: beige coloring on what would otherwise be bright white snowpack. This isn't just a curiosity. The relatively dark color of dust causes snowpack throughout the Western United States to absorb more solar energy than it otherwise would, and thus melt out earlier and faster, resulting in major headaches for water managers. More disturbingly, the dust storms that cause this buildup could be harming human health. With all of this in mind, I emailed my colleague at the University of Colorado, Jason Neff, who conducts research on this issue. Neff, director of the university's Environmental Geochemistry Laboratory, wrote me back right away: "The dust is particularly dirty this year!" The cause: A series of dust storms that deposited one layer after another of the stuff atop of the snow. As the snow melts, the dust concentrates, eventually leaving a very dirty surface.

Layers of dust are clearly visible in this trench dug by researchers in Colorado's San Juan Mountains on April 22. (Image: Center for Snow and Avalanche Studies, Colorado Dust-on-Snow Program.) In the photograph to the left, multiple dark layers in a trench dug into the snowpack in Colorado last April chronicle the passage of dust storms. There have been 10 of them since last fall. The dark layers dramatize what Neff and his colleagues found in a study published online on May 9. The research shows that dust blowing in the wind has increased dramatically across large swaths of the Western United States during the past 17 years. Previous research using sediment cores recovered from lakes showed that dustiness increased in the West between 1850 and 1900. But then it actually declined, Neff says. Unfortunately, lake sediments do not clearly reveal what has been happening in the past few decades, Neff says. The problem is that the uppermost layers of sediments in a lake are mushy. So even if more and more dust has been settling into those layers, it would be very difficult to tease out the precise chronological details. Janice Brahney, a former doctoral student in Neff's lab, devised a possible solution: Determine dustiness indirectly by looking for calcium, which winds can loft into the atmosphere from eroding soils. Carried on air currents, the calcium then falls back to Earth in precipitation. Since 1970s, researchers have monitored calcium deposition across the United States as part of the National Atmospheric Deposition Program. A statistical analysis of those records by Brahney and colleagues reveals large upswings in calcium in the Northwest, Midwest and Intermountain West. "The place that really stands out is the Western Slope of the Rocky Mountains," Neff says. The research showed a 400 to 500 percent increase in calcium deposition over 17 years in this region. "It’s pretty dramatic." The calcium is probably coming along with dust storms blowing in from Arizona, Utah and New Mexico. And that raises what Neff calls the "million dollar question": What's causing the dust storms? One part of the equation is pretty straightforward: Start with drought, which makes soils more prone to erosion, and then add intermittent high winds. "Put together, this can explain about half of the trend for the Western United States," Neff says. But explanations for the other half are more speculative. "There has been a big increase in off-road vehicle use, oil and gas exploration, and urban, surburban and exurban development," Neff notes. "Basically, there has been a lot of human disturbance to the landscape. But we don’t know which is most likely to be the cause." Research has shown that increasing amounts of dust has caused snow to melt out up to a month earlier in the Colorado River Basin. This reduces the amount of runoff and water supplies downstream. Some 27 million people in seven states depend on water from the basin for drinking, agriculture and industry. Increased dustiness may be having an even more direct impact by impairing human health. A study by the Centers for Disease Control has documented an almost ten-fold increase in cases of Valley Fever, a fungal respiratory infection, in several southwestern states from 1998 through 2011. According to Neff, areas with the biggest increases in the disease have also seen the most dramatic increases in dustiness. "If you look at the case loads of valley fever, and compare them to our dust records, you'll see that they look awfully similar," Neff says. Moreover, asthma is a significant and increasing problem in parts of the rural West. "Most people would say this region has the cleanest air quality in country," he says. "Yet we’re seeing all this asthma. We have no answers, only a lot of questions about whether these dust storms are having a bigger effect on human helath than what you might think."