Birth of a Cyclone?

An area of disturbed weather in the Pacific Ocean, as seen on Saturday in visible light and the infrared by a GOES weather satellite. (Source: NASA MSFC Earth Science Office) The animation above shows a broad area of disturbed weather a few hundred miles southwest of Mexico that stands a good chance over the next five days of becoming a tropical cyclone. From the National Hurricane Center's Tropical Weather Outlook issued early today:

A broad area of low pressure located a few hundred miles south-southeast of the Gulf of Tehuantepec has changed littl since yesterday. Environmental conditions are expected to become more conducive for the development of this disturbance during the next few days as it drifts generally northward. Regardless of tropical cyclone formation, this system has the potential to bring locally heavy rains to portions of western Central America and southeastern Mexico this coming week. * Formation chance through 48 hours...medium...30 percent * Formation chance through 5 days...high...70 percent

It's possible that the disturbance could cross into the Gulf of Mexico late next week and give birth to a tropical depression late next week, according to Jeff Masters, chief meteorologist for Wunderground.com. If so, will this be the seed of the first named storm of the 2014 Atlantic hurricane season? It's too soon to say. But this is something to keep an eye on over the coming week. In the meantime, check this out: 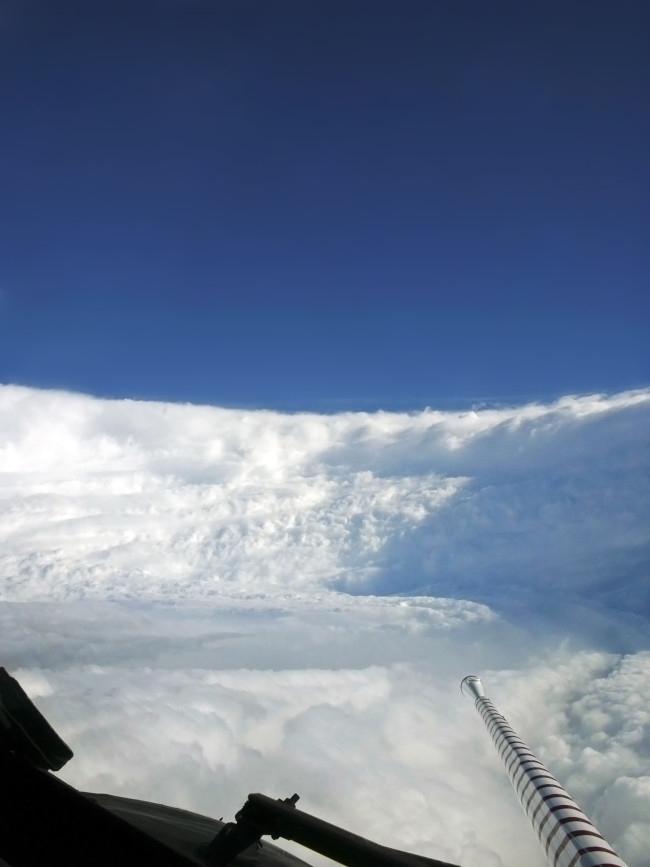 Inside the eye of Hurricane Katrina on August 28, 2005, as seen from a NOAA WP-3D Orion hurricane hunter aircraft. (Source: NOAA) You're looking at the eyewall of Hurricane Katrina as it was swirling in the Gulf of Mexico on August, 28th, 2005, prior to making landfall in the United States. It's one of the most amazing hurricane photos I've ever seen. I've included it here because it is featured in the very first official blog post of the National Hurricane Center. Here's an excerpt from "Inside the Eye":

The National Hurricane Center has long had a vision of being America’s “calm, clear and trusted voice in the eye of the storm.” Much like the NOAA Hurricane Hunter aircraft in the picture [above], we also want you to have a view from inside the eye. We want you to see what’s happening at the Hurricane Center before, during, and after a storm. We also want to help you understand how to interpret our forecasts so that even when there is a hurricane, you will have a clear understanding of what to expect and plan for.

Hurricane season is just getting underway. What will it bring? Stay tuned...