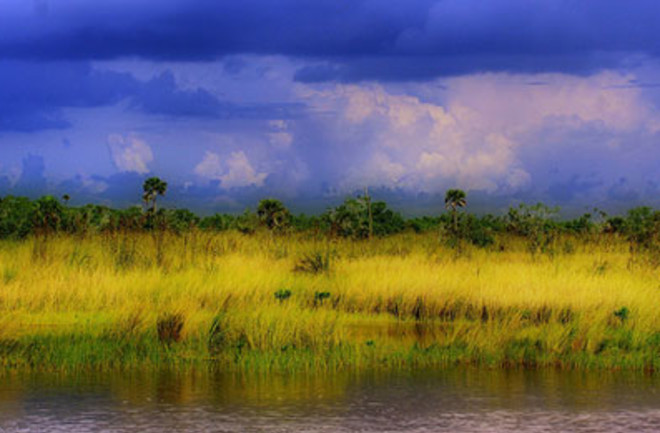 The governor of Florida announced yesterday that the state is putting its money where its mouth is when it comes to conservation of the imperiled Everglades. The state has agreed to buy out U.S. Sugar for $1.75 billion, and will switch the company's 187,000 acres of land from sugar cane fields to natural wetlands. U.S. Sugar's property lies just south of Lake Okeechobee, the heart of the Everglades' unique ecosystem. Florida Governor Charlie Crist

said the deal is "as monumental as the creation of our nation's first national park, Yellowstone. This represents, if we're successful, and I believe we will be, the largest conservation purchase in the history of the state of Florida" [AP]. Environmentalists are delighted by the conservation coup, and will be keeping their fingers crossed that everything goes as planned; under the proposal, U.S. Sugar will farm the land for six more years before turning it over to the state.

Once the chunks of farmland are restored to their natural, swampy state, they will connect fragmented sections of the so-called "River of Grass" and will reestablish natural water flow throughout the ecosystem. [T]he expanse of about 292 square miles would add about a million acre-feet of water storage. That amount of water — enough to fill about 500,000 Olympic size swimming pools — could soak the southern Everglades during the dry season, protecting wildlife [and] preventing fires

The sugar farms of Florida have been blamed for many of the Everglades' problems, as they diverted the flow of water from the wetlands to the cane fields. Environmentalists have fought to protect the grasslands in court, in the statehouse, and on Capitol Hill. In 2000 they appeared to win a victory when Congress approved a 30-year restoration plan that was originally estimated to cost more than $7 billion. This new purchase and its

new opportunities for water storage in the agricultural area will require a revamping of the original restoration plan from 2000, which envisioned hundreds of underground storage wells. But that's a good thing; the storage wells would have been ridiculously expensive, and the original plan was dead in the water [Time].