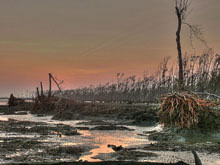 In a new study, researchers looked at the role of cyclones in Earth’s carbon cycle. They found that cyclones (an umbrella term for hurricanes, typhoons, and tropical storms) can transfer terrestrial organic carbon, in the form of plants, soil, and fossils, to the bottom of the oceans and prevent it from entering the atmosphere.

In just a few days a single typhoon can dump the same amount of carbon to the bottom of the ocean as an entire year of rain. The storms do this by ripping mud and decaying vegetation off the land, and flushing it down rivers in huge floods and out to sea

The study, published in Nature Geoscience [subscription required], conducted on the LiWu river in Taiwan, focused on how cyclones sequester carbon rather than how much carbon they bury.Nevertheless, the researchers warn that the amount of carbon sequestered by cyclones is a pittance compared to the amount of carbon generated by human activity.“

The current amount of carbon dioxide building up from manmade sources is about 100-1,000 times faster than this carbon (burial) from the interaction between the cyclones, erosion and forests," said Robert Hilton of Cambridge University who was one of the authors."In terms of the manmade carbon cycle this is not going to save us. But it illustrates that the earth has natural ways of dealing with carbon dioxide," he said

Indeed, the recent surge in tropical storms appears to be a natural response to unnatural global warming:

The more carbon dioxide is released into the atmosphere, the greater the strength of such storms

While collecting their cyclone data, the researchers boldly risked life and limb.One especially fearless researcher, Meng-Chiang Chen of the Taroko National Park Headquarters in Taiwan, strapped himself to a harness in the middle of a typhoon in order to fill bottles with sediment-laden flood water.

Related Content: DISCOVER: Watery Grave DISCOVER: Maps: Where Do the Nastiest Hurricanes Emerge? 80beats: Global Warming Is Making Hurricanes Fiercer, and the Worst is Yet to Come