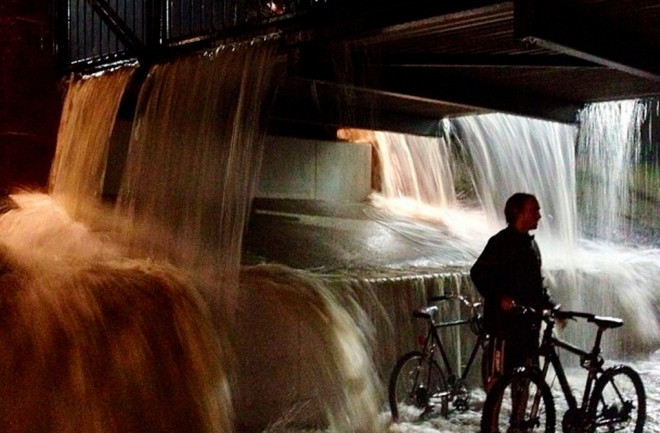 Flood waters pour into an underpass on the University of Colorado campus in Boulder last night. (Photo: Courtesy Brandon Randash via Instagram.) Ordinarily, the forecast discussion pages of National Weather Service forecasts are clipped, cut and dry. But not the one issued an hour ago for the Denver-Boulder area:

UPDATE...MAJOR FLOODING/FLASH FLOODING EVENT UNDERWAY AT THIS TIME WITH BIBLICAL RAINFALL AMOUNTS REPORTED IN MANY AREAS IN/NEAR THE FOOTHILLS.

And the forecast is for "lots more rain today and tonight."

A photo by the Colorado State Patrol shows the rampaging Big Thompson River along Highway 34 just west of Loveland. (Photo: CSP Larimer Twitpic) As the photo above suggests, more rain could be devastating. As I'm writing this, Fourmile Creek, which drains an area highly prone to erosion and flooding thanks to the 2010 Fourmile Canyon Fire, is flooding into northern neighborhoods of Boulder. And that is just one of many such stories being repeated this morning up and down Colorado's Front Range. This is a very bad situation. And it's getting worse.

Dry Creek in Niwot, CO, 1:30 a.m., 9/12/13, a block from my house. It is ordinarily two feet wide. Here, it is at least 25 yards wide, and five feet higher than normal. (Photo: © Tom Yulsman) Some context: We went from breaking record high temperatures last week (including tying the record — twice — for the highest temperature ever recorded in September in the Denver area), to what appears to be unprecedented torrential rainfall that has caused devastating flash flooding and killed at least two people in this area, and another person further south. Some numbers to consider: Over the past 18 hours or so, Boulder has received 9 inches of rain. By comparison, average total precipitation for Boulder for the entire month of September is just 1.68 inches. And the record tally for the entire month was 4.67 inches, according to a weather forecaster on Channel 7 here. The proximate cause is tropical, monsoonal moisture streaming up from the south and a stalled front that is pinning it all right over us. Check back later for more about the weather patterns implicated in this extreme weather event, and other updates.