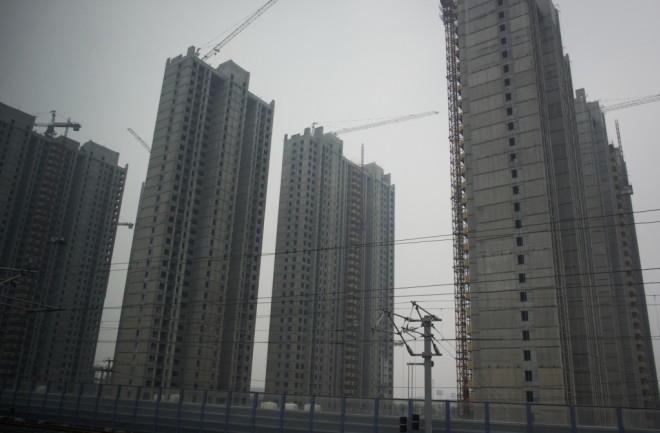 Massive concrete slabs destined to be high rise apartment houses loom through thick haze south of Beijing along the bullet train line from Shanghai. (Photo: © Tom Yulsman) It may not be the "airpocalypse," but as I write this post from a hutong district in Beijing, the air quality is deteriorating. If you've been following ImaGeo, you may know that I've been taking a break from regular blog posts while I travel in Asia for a few weeks. My family and I are currently in Beijing, which last January suffered horrific air pollution — with readings of small particulate matter, known as PM 2.5, literally off the charts. To see just how bad it was, check out this piece with accompanying photos from the Washington Post.

As I write this, the air quality index for Beijing indicates conditions that are unhealthy for people sensitive to pollution. (Click for a larger version. Source: aqicn.org) Conditions are not close to being that bad right now. But after a gloriously clear day yesterday, which revealed a low mountain backdrop to this teeming city, and the first nighttime stars we've seen in China, the PM 2.5 reading is in a range that is unhealthy for sensitive people, such as those suffering from asthma. In other words, people like me. We arrived here on Saturday, May 25, from Shanghai, after a trip on one of China's famed bullet trains. I took the photo at the top of this post from the train — which was arrowing through the region just south of Beijing at 189 miles per hour per hour. That's about the speed of a commercial jetliner at takeoff. To capture the buildings without blurring, I shot it at the camera's highest shutter speed: 4,000th of a second. Since we got to China, I've seen innumerable apartment blocks like these being built. Construction cranes dot the landscape like flocks of giant birds — so many, in fact, that by all rights the construction crane should replace the red-crowned crane as the national bird of china. In the photo, apartment blocks loom through a scrim of thick haze, emblematic of rapid industrialization and urbanization that have contributed to China's air pollution woes. Here in Beijing, one of the major culprits has been coal-fired boilers. In 2010, an astonishing 26.35 million tons of coal were burned in the city. Now, the city is taking steps to reduce air pollution by closing these major sources of particulate pollution. The goal is to eliminate most of them by 2015. According to the China Daily, the shuttering of boilers so far has reduced coal use by 700,000 metric tons, and this year the plan is for an additional reduction of 1.4 million metric tons. And as the dog days of summer arrive here in Beijing — today the forecast is for temperatures in the 90s — the city is taking aim at what it says is another culprit: outdoor barbecue stands. They are common here in the hutong district where we are staying. Hutongs are Beijing's traditional narrow alleyways. As a story from the Wall Street Journal a couple of weeks ago put it:

The scent of mutton skewers, dusted with chili pepper and cumin and roasting atop makeshift streetside grills, is one of the most cherished pleasures of summer in Beijing – a cheap and seductive reward for suffering through a season otherwise marked by oppressive heat and pungent, chewable air. But just as they’ve moved to knock down the ancient alleyways that once gave Beijing its charm, city officials are now moving to rein in the skewer sellers. Among the main reasons: Air pollution.

On one level, this is a pity, since the barbecue stands are a wonderful and delicious part of the local scene. But if they help to make the air less "chewable," I guess it will be a good thing.