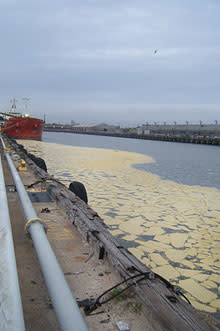 Fat is in the news: Not just because of the world's obesity problems, but because one agriculture company accidentally fattened up the Houston Ship Channel on Tuesday by spilling 15,000 gallons of beef tallow into it. The fat was in an onshore storage tank owned by agricultural company Jacob Sterns and Sons, which for unknown reasons leaked about 250,000 gallons of animal fat. About 15,000 gallons seeped into the channel through a storm drain, and immediately solidified after hitting the water, Coast Guard spokesman Richard Brahm told The Wall Street Journal:

"Luckily the stuff is easy to clean up," Mr. Brahm said. "It solidifies at room temperature, so as soon as it hit the water it just kind of sat there."

The floating fat looks like a collection of dirty little icebergs (officially called "patties"), but is causing some problems. Three quarters of the northern end of the channel had to be shut down for the cleanup effort--luckily it didn't block tanker traffic along the waterway. The US Coast Guard helped clean up the fat in the channel, and finished pitch forking and booming the floating fat earlier this week. Luckily the spilled fat isn't expected to have a large environmental impact, and cleanup was relatively simple, officials told CNN

"It was good that it's cold and not summertime because the cold helped the fat congeal and allowed workers to scoop it up," said Texas General Land Office spokesman Jim Suydam. "Also, the bugs would have been nightmare if it were summertime."

Discoblog: How to Prep for Oil Spills: Dump 210,000 Gallons of Popcorn in the Water

Not Exactly Rocket Science: Bacteria ate up all the methane that spilled from the Deepwater Horizon well

DISCOVER: #1: Worst Oil Spill of All-Time, and a Future Full of Oil